A University of Florida student was tasered for asking John Kerry a long question.

U.S. Sen. John Kerry’s speech at the University of Florida came to a dramatic close Monday, shortly after a vocal audience member was hauled off by police and shot with a Taser gun. The audience member was preliminarily identified by UF officials as Andrew Meyer, a UF student in the College of Journalism and Communications.

Toward the conclusion of Kerry’s UF forum, Meyer approached an open microphone at the University Auditorium and demanded Kerry answer his questions. The student claimed that University Police Department officers had already threatened to arrest him, and then proceeded to question Kerry about why he didn’t contest the 2004 presidential election and why there had been no moves to impeach President Bush.

A minute or so into what became a combative diatribe, Meyer’s microphone was turned off and officers began trying to physically remove him from the auditorium. Meyer flailed his arms, yelling as police tried to restrain him. He was then pushed to the ground by six officers, at which point Meyer yelled, “What have I done? What I have I done? Get away from me. Get off of me! What did I do? … Help me! Help.” Police threatened to user a Taser on Meyer if he did not “comply,” but he continued to resist being handcuffed. He was then Tased, which prompted him to scream and writhe in pain on the floor of the auditorium.

After the incident, Capt. Jeff Holcomb of the UPD said Meyer had been charged with disrupting a public event and placed in the Alachua County Jail. Holcomb said there would be an investigation into whether the officers used force appropriately, adding that employing a Taser gun would only be justified in a case where there was a threat of physical harm to officers.

I’ve been at plenty of these sort of forums and find these idiots who try to take them over by haranguing about some nutty agenda quite annoying. The use of potentially deadly force, however, strikes me as an excessive reaction.

Michelle Malkin has quite a bit of information on this one, including an account from an emailer who claims he was in attendance and notes that Meyer has a reputation for doing outrageous things in order to gain publicity. Still, he looks like a pretty skinny kid and was rather clearly unarmed. You’d think two trained police officers could subdue him without tasers.

Clayton Craymer observes that, “RoboSenator seems to be either completely and utterly unaware of this amazing sequence of events taking place in front of him–or completely and utterly unconcerned about it. Either way, it doesn’t say much for John Kerry.” I can’t tell from the video but it’s quite likely Kerry simply had no clue about the tasering and just figured the nut was screaming to further disrupt the event. Speakers faced with this sort of disruption are generally embarrassed or flustered and tend to respond with either lame attempts at humor or simply pretending it’s not happening.

Ed Driscoll uses the opportunity to get in a nice parody of Kerry:

You know, education, if you make the most of it, if you study hard and you do your homework, and you make an effort to be smart, uh, you, you can do well. If you don’t, you get zapped by campus security for getting too rowdy during an appearance by a man that some leading historians believe may have once been a candidate for the presidency.

In any event, this speech will surely be seared — seared! — into the kid’s memory. 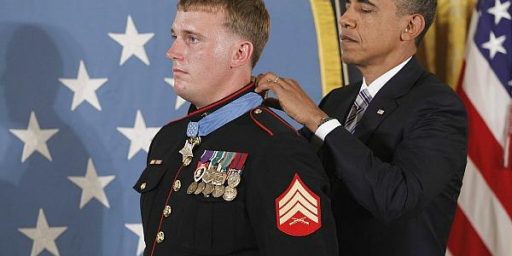