Superman: Truth, Justice, and . . . all That Stuff

Apparently, Superman is not an American anymore.

SUPERMAN’S motto, “Truth, justice and the American way,” has been rewritten in the new “Superman Returns” to “Truth, justice and . . . all that stuff.” Jeannie Wolf reports on Movies.com that screenwriters Mike Dougherty and Dan Harris wanted to avoid outdated jingoism. Dan: “I don’t think ‘the American way’ means what it meant in 1945.” Mike: “He’s not just for Metropolis and not just for America.” Dan: “He’s an alien, from Krypton; he has come to Earth to be kind of a savior for this world, not our country . . . And he has no papers.” Mike: “What would happen with the immigration laws we have now?” Dan: “I’d like to see someone kick him out!”

Lovely. I understand the sentiment–Superman has been saving the (fictitious) world (he fictitiously inhabits) for decades. Still, it’s just wrong somehow.

Via “Tyler Durden,” who is somewhat less understanding. 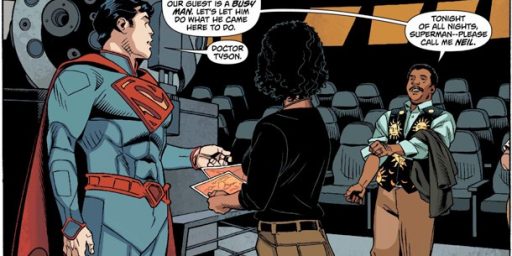