The Supreme Court declined to hear a major case regarding discrimination based on sexual orientation, but the issue is likely to come up again in the very near future. 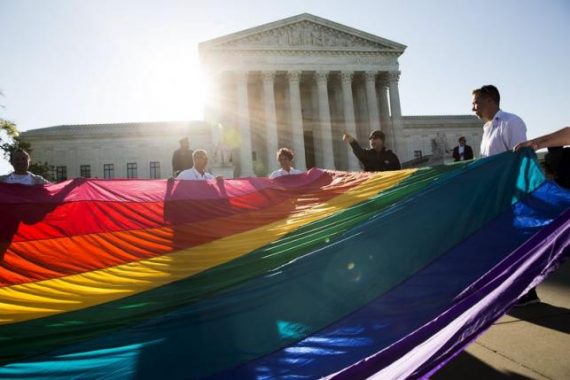 WASHINGTON — The Supreme Court said on Monday that it would not hear an appeal in a case that could have resolved whether a federal law prohibits employers from discriminating against gay and lesbian workers.

The case concerned Jameka Evans, who said a Georgia hospital discriminated against her because she is a lesbian. She sued under Title VII of the Civil Rights Act of 1964, which prohibits workplace discrimination based on sex.

In March, a divided three-judge panel of the United States Court of Appeals for the 11th Circuit, in Atlanta, ruled that Title VII’s reference to sex did not encompass discrimination based on sexual orientation.

The reach of Title VII has divided the federal appeals courts. In April, by an 8-to-3 vote, the United States Court of Appeals for the Seventh Circuit, in Chicago, said Title VII covered gay people. “It would require considerable calisthenics to remove the ‘sex’ from ‘sexual orientation,'” Chief Judge Diane Wood wrote for the majority.

Such conflicts between appeals courts can prompt Supreme Court review. But the justices may have been troubled by an unusual aspect of Ms. Evans’s case. Lawyers for the hospital argued that it had not been properly served with legal papers, and they told the Supreme Court that they did not intend to appear to participate in the case.

There are other cases on the horizon. In September, the United States Court of Appeals for the Second Circuit, in New York, heard arguments on the issue, in a case brought by a sky-diving instructor who said he was fired because he was gay.

Those arguments had a curious feature: Lawyers for the federal government appeared on both sides. One lawyer, representing the Equal Employment Opportunity Commission, said Title VII barred discrimination against gay people. Another, representing the Trump administration, took the opposite view.

The split within the government became public in July, when the Justice Department filed a brief telling the Second Circuit that the commission was “not speaking for the United States.”

The Second Circuit is expected to rule shortly, and an appeal in that case, Zarda v. Altitude Express, could reach the Supreme Court.

Lyle Denniston comments on the decision to not accept the appeal:

The Supreme Court on Monday acted – probably because of procedural reasons – to leave undecided at least for now the spreading controversy over whether federal civil rights laws give protection to workers and students who are gay, lesbian or transgender.

Without offering any explanation – and, significantly, without any noted dissents – the Justices refused to hear the appeal of a former security guard at a Georgia hospital that she was discriminated against because she is a “gay female.”

Lawyers for Jameka K. Evans of Savannah tried hard to salvage the case at the Court after lawyers for Georgia Regional Hospital said they would not take any part in it even if the case were accepted for review, but that effort apparently failed when the Justices discussed the case in private for the first time last week.  On Monday, a simple order denied review.

The denial of review marked the second time in about a year that the Court stepped aside from the dispute of whether two civil rights laws – known as Title VII and Title IX – now cover discrimination based on sexual orientation or gender identity.  (Title VII, enacted in 1964, outlaws bias in the workplace “because of sex” and Title IX, passed in 1972, forbids discrimination “based on sex” in any educational program that receives federal funds.)

The Court had agreed last year to review the controversy as it applies to Title IX in a case involving a transgender high school student in Virginia, but that case was sent back to a lower court after the Trump Administration abandoned the defense of his claim; the Obama Administration had supported that plea.  The case is now being reviewed back in a trial court in Norfolk.

There were no apparent procedural complications in the case as it worked its way through lower federal courts, winding up with a 2-to-1 decision last March by the U.S. Court of Appeals for the Eleventh Circuit.  It ruled that the 1964 law does not go beyond discrimination between male and female workers.  In April, a split developed when the U.S. Court of Appeals for the Seventh Circuit became the first appeals court to rule that Title VII does apply to such bias based on sexual orientation.

Once the Evans case from Georgia had reached the Supreme Court, procedural complications soon began.  The hospital’s lawyers said they would not take any part, and argued that the case against it had been procedurally flawed, and that it was not the right entity to have been sued.

It chose not to reply to the Evans appeal, but then the Justices asked for a response.

Again, the hospital’s lawyers raised procedural issues, and again said they would not participate.

Evans’ lawyers argued in reaction that the Court could have appointed another lawyer from outside the case to defend the lower court ruling against Evans, as the Court does with some frequency when one side in an appeal bows out or does not show up.  Evans’ team also said that the Court probably would have opposing sides appearing in the case anyway if it would grant rreview, since the Justice Department would probably join in against Evans.

The Justices, however, apparently decided against taking either suggestion, and simply denied review.  If the case had appeared to be one in which procedural difficulties could have been overcome, and the Court still voted to deny review, there almost certainly would have been dissenters.  None were noted in Monday’s order.

Evans’ lawyers had argued that the Court should take on the controversy, saying that the issue had “profound implications for individual dignity and employment practices from coast to coast.”

As is typically the case, the Court did not offer any reason for its decision not to accept the case for review and, as usual, the most that can be said is that there were not four Justices who thought this particular case was appropriate for review by the nation’s highest court. That being said, the fact that other Circuits have ruled in a conflicting manner on the issue at the center of this case, something of which the Justices were no doubt aware even in the unlikely event that it wasn’t raised in the briefs filed on behalf of the petitioner. Ordinarily, of course, a conflict among the Circuit Courts of Appeal would be a reason to prompt the Justices to accept an appeal so as to bring resolution to the inconsistency. In this case, though, there was a potential procedural flaw in the fact that the lawyers for the hospital that was accused of discrimination were alleging that their client was not properly served with legal papers in the initial case. While it does appear from the record that this didn’t prevent the courts below from ruling on the legal merits of the case, it’s possible that the Justices viewed the potential procedural flaw as significant enough that they should decline to hear the case at all. Additionally, the fact that there are a number of other cases raising this issue making their way through the courts, including the Seventh Circuit Court of Appeals decision noted above, may have motivated the Justices to wait until a case raising the issue that didn’t have these procedural flaws would be a better candidate for dealing with this undeniably important issue.

As I noted back in April when the Seventh Circuit issued its opinion, the balance of the law on this issue does not look promising for those seeking to extend existing civil rights laws to cover discrimination based on sexual orientation. It seems clear from the legislative history of the Civil Rights Act of 1964 that the provisions regarding barring discrimination based on “sex” were meant to cover those situations where someone was hired, fired, or treated in an unfair manner by an employer based on their gender, meaning specifically whether they are male or female. There is no indication whatsoever that when Congress was drafting the law that it intended or even considered the fact that by “sex” they meant not only gender,, but also the question of whether they were attracted to members of the same sex or members of the opposite sex. Indeed, at the time that the law was drafted that was simply not an issue and it’s difficult to imagine that the legislators who voted in favor of the law intended that it should or would be interpreted to apply to sexual orientation as well as gender. This distinction has been recognized in other jurisdictions, specifically at the state and local level where civil rights laws have been amended by the legislature to include a ban on discrimination based on sexual orientation. Additionally, the Employment Non-Discrimination Act, which would effectively accomplish what the Plaintiff in these various cases have advocated by done by judicial fiat, has been pending before Congress for several years now. Rather than asking the Courts to deliver what is at the very least a creative reinterpretation of a fifty-four-year-old law, it strikes me that it would be more appropriate, and more in line with what the Constitution has deemed to be the proper role of the Judicial and Legislative Branches in our Federal Government. It’s true that the prospects that ENDA can pass at any point in the near future are dim indeed, but that isn’t relevant to the point here. It isn’t the job of Judges to read things into statutes that clearly aren’t there, and in this case it seems clear to me that there is no bar against discrimination based on sexual orientation in the Civil Rights Act of 1964, that it was never the intention of the drafters that the law cover such situations, and that the law should not be interpreted in so overly broad a manner so as to create liability under the law that clearly doesn’t exist based on a fair reading of the words on the paper.

None of this means, of course, that discrimination based on sexual orientation isn’t something that shouldn’t be addressed, of course, or that it isn’t a bad thing. Ideally speaking, any discrimination based on any criteria other than one’s fitness for a particular job and job performance is unfair on some level.However, fairness isn’t a justification for reading things into a law that clearly are not there or for applying a long-standing and well-respected and important law to say things that it clearly does not say. That isn’t now the law is supposed to work, and it isn’t how Judges should be doing their jobs.