Q Thank you, Mr. President. Do you think questions of fraud in the U.N.’s Oil for Food program have hurt Kofi Annan, and do you think he should resign, as Senator Coleman has urged?

PRESIDENT BUSH: Yesterday I spoke about the United Nations, I said the United States participates in multi-lateral organizations, and we expect those organizations to be effective. You know, when an organization says there’s going to be serious consequences if something doesn’t happen, it better mean what it says.

Q Should he resign, sir?

PRESIDENT BUSH: I look forward to the full disclosure of the facts, a good, honest appraisal of that which went on. And it’s important for the integrity of the organization to have a full and open disclosure of all that took place with the Oil for Food program.

If you compare these evasions to other recent statements on Annan’s performance, it becomes even more obvious that the president is — ahem — displeased:

“Mr. Annan is doing an excellent job as secretary-general,” said Foreign Minister Jack Straw of Britain, a major US ally on Iraq, said in a statement released in New York as other major powers and UN members showed support for Mr Annan.

Britain’s UN ambassador, Emyr Jones Parry, said there was no question the United Nations could do a better job in many areas. But he said “The United Nations is doing a good job. Ask those people who need it most in west Africa, for example, or in south Asia”.

Mr Annan’s inquiry into the oil-for-food program should be “full and transparent”, Mr Straw said. “We await the results of this inquiry.”

Russia’s deputy foreign minister, Yuri Fedotov, told the Interfax news agency that the “surge of criticism” of Mr Annan “is groundless in our opinion”.

The current president of the Security Council, Algeria’s ambassador, Abdallah Baali, told a news conference that there was no discussion among UN members about whether Mr Annan should resign. “As far as we are concerned, Algeria and the other members of the United Nations, the secretary-general has been elected for five years,” Mr Baali said.

I, of course, think that the White House position is on firmer ground, but let me bracket that thought for a second. Even if, unlike Bush, one wanted to avoid causing a stir, what possible justification could the British have had for uttering “Annan” and “excellent job” in the same sentence? That’s taking diplomacy too far, isn’t it? The UN is in the midst of a major corruption investigation, after all.

Riot Act Or Plan Of Attack? 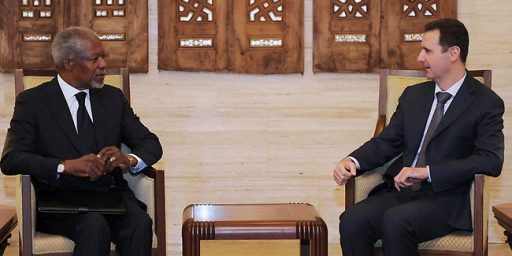