Tarzan’s Cheetah Dies At 80 [Update: Or, Maybe Not] 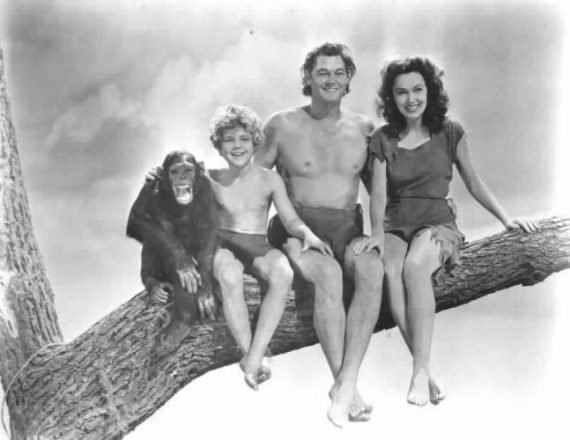 The chimpanzee who was part of the iconic Tarzan movies of the 1930s died recently at a very advanced age:

Cheetah the chimpanzee, who acted in classic Tarzan movies in the early 1930s, died of kidney failure Saturday at Suncoast Primate Sanctuary in Palm Harbor, a sanctuary spokeswoman said.

He was an outgoing chimp who was exposed to the public his whole life, Cobb said today.

“He wasn’t a chimp that caused a lot of problems,” she said.

Cheetah acted in the 1932-34 Tarzan movies, Cobb said. Movies filmed during that timeframe starred Johnny Weissmuller and include “Tarzan and His Mate” and “Tarzan the Ape Man,” according to the Internet Movie Database.

Sometime around 1960, Cheetah came to the sanctuary from Weissmuller’s estate in Ocala, Cobb said.

In the wild, the average chimp survives 25 to 35 years and at zoos chimps typically live 35 to 45 years, she said.

Ron Priest, a sanctuary volunteer for seven years, said Cheetah stood out because of his ability to stand up – shoulders tall, back straight – and walk like a person.

Cheetah also stood out for another reason, Priest said: “When he didn’t like somebody or something that was going on, he would pick up some poop and throw it at them. He could get you at 30 feet with bars in between.”

He could’ve had a career in Congress.

Update: As this 2008 Washington Post article notes and discusses at length, there’s a serious question about whether the claims made about this animal are true. Call it Cheetah-gate.

Austrian Courts: Chimpanzees Are Not People