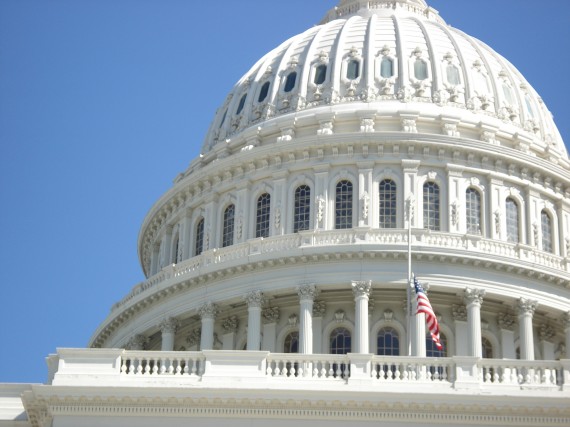 The Capitol Dome is cracking, and Congress isn’t doing much about it:

WASHINGTON — To the myriad indignities suffered by Congress, including stagnant legislation, partisan warfare and popularity on a par with petty criminals, add this: the Capitol’s roof is leaking, and there is no money to fix it.

The Capitol dome, the nation’s grandest symbol of federal authority, has been dinged by years of inclement weather, and its exterior is in need of repair.

The dome has 1,300 known cracks and breaks. Water that has seeped in over the years has caused rusting on the ornamentation and staining on the interior of the Rotunda, just feet below the fresco “The Apotheosis of Washington,” which is painted on the Rotunda’s canopy.

Like most of what the federal government is on the hook to fix — highways, bridges and airports — the dome is imperiled both by tough economic times and by a politically polarized Congress. While Senate appropriators have voted to repair the dome, which has not undergone major renovations for 50 years, their House counterparts say there is not money right now. In that way, the dome is a metaphor for the nation’s decaying infrastructure.

The skirt of the dome — the section around the base of the original sandstone foundation — was fixed up recently at a cost of about $20 million, but an additional $61 million is needed to repair and restore the rest of the structure’s exterior.

The Senate Appropriations Committee voted just before Congress left for its August recess to provide the money.

“I support funding the Capitol dome,” said Senator John Hoeven, Republican of North Dakota, who voted against an appropriations bill because it did not include money for the dome. (The money was included moments later in an amendment, which passed with Mr. Hoeven’s vote.)

The appropriators in the Republican-controlled House are starting with a smaller overall budget for the 2013 fiscal year than the Democratic-controlled Senate, and they want to finance much of the government’s operations at lower levels.

Senate leaders have decided that it would be too difficult to reconcile the two appropriations bills, as is normally done, until after the election.

That means Congress will have to pass a short-term spending bill — the sort that set off the fight that almost shut down the government last year — and it most likely will not include more money for repairs.

“This is not a ‘bridge to nowhere’ we’re talking about here,” said Senator Charles E. Schumer of New York, the leader of the Senate Rules Committee, which oversees the architect’s office. “This is basic upkeep to the United States Capitol building. There is a time and place to debate spending levels and the proper role of the federal government, but when your house has a leaky roof, you pay to fix the roof.”

Call it a metaphor for everything that is wrong with American politics, I suppose.