Long suffering fans of the Dallas Cowboys, including myself and Steven Taylor, have a love-hate relationship with owner-general manager Jerry Jones. cowb 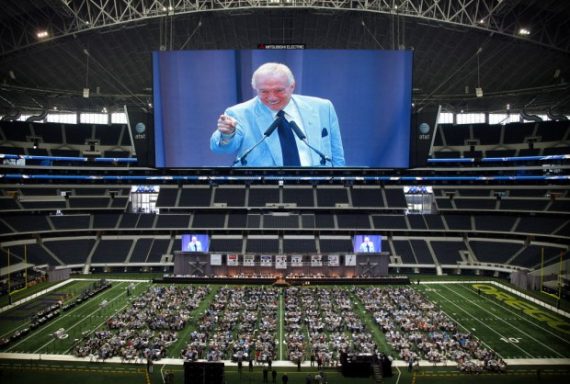 Long suffering fans of the Dallas Cowboys, including myself and Steven Taylor, have a love-hate relationship with owner-general manager Jerry Jones. There is no owner in sports with more passion for his team or more desire to win. But he undermines this by insisting on employing as his general manager a man no other NFL owner would seriously consider for that position: Jerry Jones.

Randy Galloway, who has covered the Cowboys for the Dallas Morning News and the Fort-Worth Star Telegram since Roger Staubach was young, is in the same camp. There is no more vocal critic of Jones the general manager.

And I don’t know if anyone locally has ever gotten it more right when it comes to an entrepreneurial decision involving a billion-dollar venture.

Jerry Jones’ Big Yard, with a minority investor being the taxpayers of Arlington, just keeps on giving and giving and giving. And the stadium continues to give back to its home city, and to Fort Worth and to Dallas and to the entire region.

Test me on this one, but in a mere four years has any local institution except for Dallas/Fort Worth Airport delivered more people from national and worldwide locations to North Texas?

And the influx of visitors keeps on coming. Ten days ago there was the announcement of the first college national football championship game under a playoff format. That’s yet another one of the biggies Arlington has landed, with the 2014 college season deciding who plays in the first one.

Smaller, but no less noteworthy, is Notre Dame last week promoting its moving a home game out of South Bend in early October to play Arizona State in Arlington. That’s a guaranteed 90,000 fans coming from all over, and if coach Brian Kelly has his way, another 10,000 local high school recruits will watch from a very crowded sideline.

There’s not a major sporting event in the country — or in some cases, the world — that hasn’t been here, or will be here, or doesn’t plan to be here.

It is, indeed, truly remarkable. In its short tenure, the venue has held virtually every major American sporting championship other than the Masters. The 2010 NBA All-Star Game, the 2011 Super Bowl; the 2009 NCAA southwest regionals; the 2013 Final Four; the 2009 and 2010 Big 12 Championship; the 2010, 2011, and 2012 Cotton Bowl; and numerous big time concerts, boxing championships, and regular season football games. In short, it’s the go-to venue for stadium sports in America. This, despite the Jets and Giants building a massive stadium in America’s most important city after Jerry’s palace opened.

This, about how it came to Arlington in the first place, I had not previously read:

Ten years ago, longtime Arlington resident Dr. Robert Cluck believed what he read in the newspaper. Yes, that’s still possible to do. Because he did, The Big Yard stands in Arlington.

“I noticed in the Dallas paper one morning that city officials over there were saying it didn’t look like the stadium issue would get done,” Cluck said last week. “I had assumed all along, despite all the bickering that was happening, that Dallas would never let this thing get away.

“But if Dallas couldn’t get it done, I was thinking, ‘Why not Arlington?'”

That same morning he basically cold-called Valley Ranch and asked to speak to Jerry.

One Valley Ranch official who took the initial call admitted he was skeptical: “All hell is breaking loose over the Dallas stuff, and now a baby doctor on the city council in Arlington wants to talk about building the stadium there. Well, OK.”

Jerry, however, was open-minded.

“I didn’t have to wait long for an answer,” said Cluck, who was actually the newly elected mayor of Arlington while still serving out the final month of his council post. “I was asked, ‘Can you be here in 30 minutes?'”

Amazingly, Jerry and Cluck cut a deal that day, pending a citywide vote on the sales tax issues. Cluck: “I asked Jerry how much he was going to spend on the stadium. He said $650 million. I said we will assume half of it. Jerry said, ‘Done deal.'”

Yes, Cluck admitted he had a strong notion that Jerry would not stop at $650 million, the same thought many of us had, particularly if you know Jerry. The city capped its investment at $325 million, meaning the city has a one-fourth interest after the bill was finally in at $1.2 billion.

“Jerry wanted this to be a family thing, and he wanted it to be extremely special,” Cluck said. “I didn’t really know Jerry, but I trusted him.

“There hasn’t been one thing he said he’d do that day that he hasn’t done. But there have been countless things he’s done that by the contract he didn’t have to do.”

Cluck, who remains the mayor and is running for re-election this month, took some heat 10 years ago in Arlington for tying the city to Jerry, but when the citywide sales tax vote was held in 2004, the issue passed easily.

“I don’t think anyone can say Arlington hasn’t benefited greatly,” he said. “One of the reasons I got involved was I thought Arlington needed a kick in the butt. Jerry, along with our voters approving the sales tax, gave us something that has made our city a focal point and something that is now recognized around the country, and around the world.”

My late wife had a tangential role in the project, conducting some polling of Arlington residents ahead of the referendum that would ultimately approve the deal. I don’t know that anybody aside from Jones himself had any idea it would be this big.