A generation of kids with massive student loans and no prospects is bad news for the status quo. 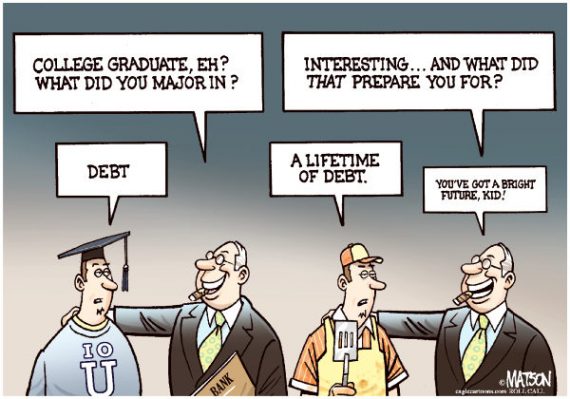 It’s getting increasingly difficult for young Americans to navigate the road to what those of us over a certain age consider a “normal” life.

Mother Jones‘ Adam Weinstein, a graduate of the Naval Academy and the Columbia School of Journalism, had Twitter rant Saturday about how the “trap” he and his wife face, needing two jobs to pay off huge student loan debt while the high cost of child care for their newborn son pretty much negates the value of the second income.

There’s an interesting sidebar conversation in the Millennials Not Buying Cars thread, with Michael Reynolds noting that the new normal seems to involve decreased consumption, increasing productivity, and fewer workers. He figures only massive redistribution will “hold civilization together.” Scott observes

This is the kind of ideas that I remember reading in science fiction in the 60s. What happens when production becomes so efficient that you need very few people to actually produce? What are all these people who are not needed going to do? What do people do when there is no more want? How do we structure society where people don’t become self-destructive? There weren’t any answers but I always felt that not everybody could self-actualize by becoming artists, writers, etc.

That genre goes further back than that. A classic example was Edward Bellamy’s Looking Backward: 2000-1887, published in 1887. Here’s the Wikipedia synopsis

The book tells the story of Julian West, a young American who, towards the end of the 19th century, falls into a deep, hypnosis-induced sleep and wakes up one hundred and thirteen years later. He finds himself in the same location (Boston, Massachusetts), but in a totally changed world: It is the year 2000 and, while he was sleeping, the United States has been transformed into a socialist utopia. The remainder of the book outlines Bellamy’s thoughts about improving the future. The major themes include problems associated with capitalism, a proposed socialist solution of a nationalisation of all industry, the use of an “industrial army” to organise production and distribution, as well as how to ensure free cultural production under such conditions.

The young man readily finds a guide, Doctor Leete, who shows him around and explains all the advances of this new age; including drastically reduced working hours for people performing menial jobs and almost instantaneous, Internet-like delivery of goods. Everyone retires with full benefits at age 45, and may eat in any of the public kitchens. The productive capacity of America is nationally owned, and the goods of society are equally distributed to its citizens. A considerable portion of the book is dialogue between Leete and West wherein West expresses his confusion about how the future society works and Leete explains the answers using various methods, such as metaphors or direct comparisons with 19th-century society.

Although Bellamy’s novel did not discuss technology or the economy in detail, commentators frequently compare Looking Backward with actual economic and technological developments. For example, Julian West is taken to a store which (with its descriptions of cutting out the middleman to cut down on waste in a similar way to the consumers’ cooperatives of his own day based on the Rochdale Principles of 1844) somewhat resembles a modern warehouse club like BJ’s, Costco, or Sam’s Club. He additionally introduces a concept of credit cards in chapters 9, 10, 11, 13, 25, and 26, but these bear no resemblance to the instruments of debt-finance. All citizens receive an equal amount of “credit.” Those with more difficult, specialized, dangerous or unpleasant jobs work fewer hours.

Fast forward to yesterday and we have Anne-Marie Slaughter‘s “How to Make the U.S. a Better Place for Caregivers.” The piece defies excerpting but her core argument is that, “What mothers need, as well as fathers, spouses, and the children of aging parents, is an entire national infrastructure of care, every bit as important as the physical infrastructure of roads, bridges, tunnels, broadband, parks and public works.” In one short column she calls for everything for the latest treatments being available for all pregnant women and newborn babies; generous maternity and paternity leave policies (she cites 280 days at 90 percent pay as an example); “high-quality, affordable day-care, either at the workplace or close by” with “high-quality meaning “care provided by trained professionals who are specialists in child development, who can provide a stable, loving, learning environment that can take care not only of children’s physical needs but also provide stimulation and socialization”; a massive expansion of paid family medical leave; highly flexible work schedules including ”Flexible start and stop times, compressed workweeks, advance knowledge about overtime and shift schedules, part-time work, short-term time off, regular time off, and extended time off”; equalizing Social Security payouts; and a dozen or so other programs. She doesn’t even mention the issue of universal access to high-quality medical care, which is outside the scope of her topic.

Nor, given that it’s a call for action rather than a policy brief, does Slaughter give us any idea what all of this will cost. Still, she notes, most industrialized countries provide some or most of these benefits and all of them do more along these lines than the United States.

Absent some Looking Backward-style socialist utopia, I can’t even wrap my head around how we can simultaneously pay for everyone to go to the best college and graduate schools they can get into, pay for their kids’ day care, and pay their kids’ day care provider the fantastic salary and benefits that would be required for them to have the skillsets Slaughter insists be the minimum. Nor do I have any idea how to operate an increasingly service-oriented economy with everyone having maximum schedule flexibility.

At the same time, it’s a pretty vicious cycle. I’m a dozen years older than Weinstein and I’ve got two young children that I’m raising on my own. But I’m at the tail end of the cohort who went to college in the days before it required a lifetime of indentured servitude to the banks; indeed, I finished each of my three degrees without ever taking out a loan and without my parents footing the bill. And, surely, we want the Adam Weinsteins of the world to get a fantastic education and be able to raise children.

The Reynolds-Slaughter solution is a massively redistributionist public infrastructure program. I’m naturally skeptical, for all manner of reasons. And, practically speaking, we’re currently on the opposite road, with a mindset of gutting existing programs in the name of budget austerity.

But a generation of kids with massive student loans with no prospect of finding jobs paying enough to pay them off—much less raise a family while doing it—is going to create a pretty powerful set of pressures on the system. I don’t think we’re going to like the result. 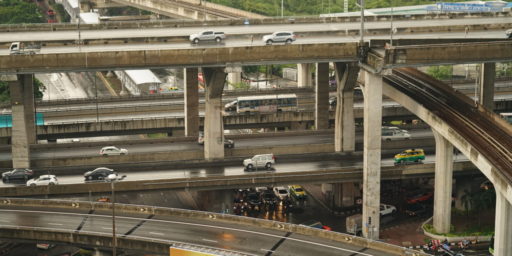