The Return Of Ahmad Chalabi? 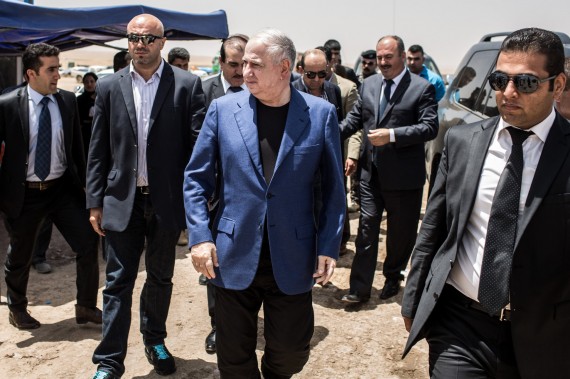 With the political future of Iraq in the balance, an old name with a tarnished past is reemerging:

BAGHDAD — He took millions of dollars from the C.I.A., founded and was accused of defrauding the second-biggest bank in Jordan and sold the Bush administration a bill of goods on weapons of mass destruction in Iraq.

At first championed by the Bush administration’s neoconservatives as a potential leader of Iraq, Ahmad Chalabi ended up persona non grata, effectively barred from the wartime American Embassy here. Now, in an improbable twist of fate, Mr. Chalabi is being talked about as a serious candidate for prime minister. He has also been back to the embassy.

With Sunni insurgents rampaging across the country and sectarian killings on the rise, everything old seems new again in Iraq — including, apparently, Mr. Chalabi.

On the face of it, Mr. Chalabi as prime minister seems, at best, highly unlikely. His exile-based, C.I.A.-financed Iraqi National Congress never built much of a grass-roots following in Iraq, and he suffered from the Americans’ growing unpopularity as the war dragged on. His role in promoting what many now view as concocted evidence of weapons of mass destruction under Saddam Hussein badly tarnished him.

Only a year after the invasion, American special forces raided his home in the upper class Mansour neighborhood, apparently in a vain attempt to prove him a spy for Iran. Unlike many returning exiles, Mr. Chalabi stayed in Iraq through all the bad years, and not without risk; one suicide bomber narrowly missed him, killing six of his bodyguards.

Spurned by the Americans, he became an ally of Mr. Sadr, the radical Shiite leader, a friend to Iran and a regular visitor to the Shiite ayatollahs in Najaf.

Mr. Chalabi, 69, put skills honed during long years of exile in Washington as a communicator and back-room operator to good use, though, forging alliances with the Sadrists and their Iranian patrons, and also with Ayatollah Ali al-Sistani, the Shiites’ supreme religious leader.

Some argue that Mr. Chalabi is at best a long-shot candidate, but so is every Maliki opponent at this point. Mr. Maliki’s State of Law party gained the biggest number of seats in the April 30 election, and now claims 95, well short of the 165 needed to make a majority in the 328-seat Parliament. But Mr. Maliki has lost support from the powerful Shiite clerics who, like the Americans, have politely but clearly signaled they would prefer he step down.

Replacing Mr. Maliki is one of the few things nearly all other politicians agree on — the other Shiite parties, as well as the Sunnis and Kurds and a host of tiny parties, which together could theoretically control as many as 233 seats in the Parliament.

Given his past, it doesn’t strike me that Chalabi is the best leader for Iraq going forward. However, given that the parties in Parliament are basically trying to find a way to block Maliki, who is refusing to leave, this may be his road back to political redemption. The biggest obstacle would seem to be the fact that Maliki’s party won the most seats in the election and it’s going  to be difficult to form a government without him.