In the Trump Era, the White House Press Briefing is becoming shorter and less informative. 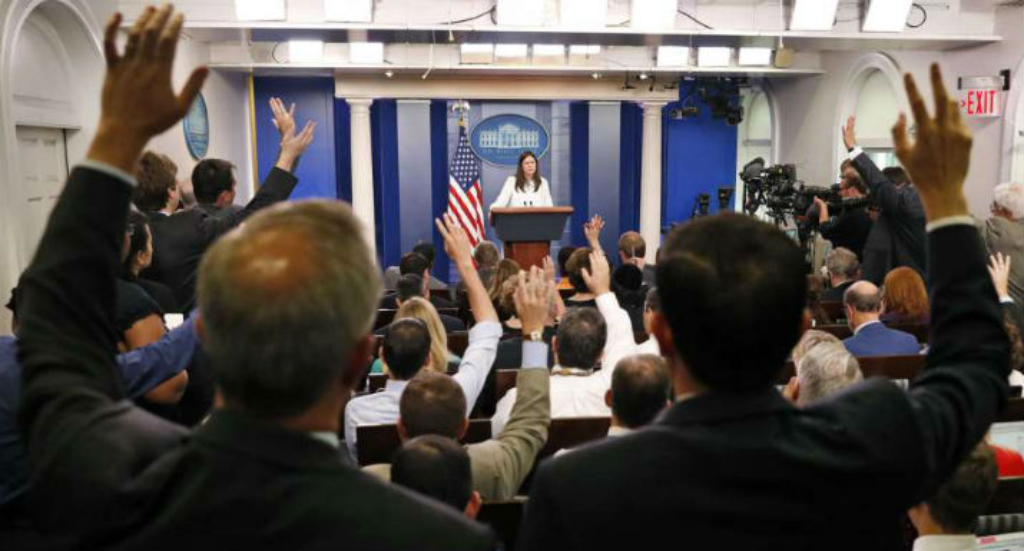 The White House Press Briefing is slowly dying under the Trump Administration:

The final weekday of May, like most others in the month, passed without a formal White House press briefing. On the dozen occasions in May when President Trump’s spokesmen conducted question-and-answer sessions with reporters — on camera at the White House or off camera aboard Air Force One, as deputy White House press secretary Hogan Gidley did on Thursday — the average duration was 17.6 minutes.

The length of these Q&As has declined in each month since January, when a typical exchange with reporters lasted about 30 minutes.

At the current rate of decline — about 3 minutes per month — press briefings will disappear altogether by November. Trump mused on Twitter last year that “maybe the best thing to do would be to cancel all future ‘press briefings.’ “

An end to White House briefings seems unlikely, given the benefits afforded Trump, particularly during the formal, televised sessions. Whatever the day’s news, White House press secretary Sarah Huckabee Sanders gets to make an opening statement about anything she chooses, live on every cable news channel.

Sometimes Sanders uses the time to read fan mail to the president, as she did May 17, when she shared a letter from an 11-year-old boy who wrote: “I listen to your talks, and I went to the inauguration and saw you. You’re awesome.” On that day, the briefing lasted 16 minutes, four of which were devoted to touting Trump’s donation of his second-quarter salary to the Department of Veterans Affairs.

To cancel the briefings would be to give up a major public-relations platform — an un-Trump-like move. But to gradually pare down the briefing time would be to limit the White House’s exposure to tough questions. That is what’s happening now.

Tracking the duration of Q&As is not the only way to measure media access, of course, but The Washington Post’s Philip Bump noted last week that the Trump White House is stiff-arming the press, according to other metrics, too.

And the Erik Wemple Blog on Wednesday chronicled Sanders’s habit of quashing follow-up questions and speeding through briefings with variations of “we’re really tight on time today” when, in many cases, the time constraints are self-imposed.

This chart demonstrates just how much the length of a press briefing has shrunk just this year: 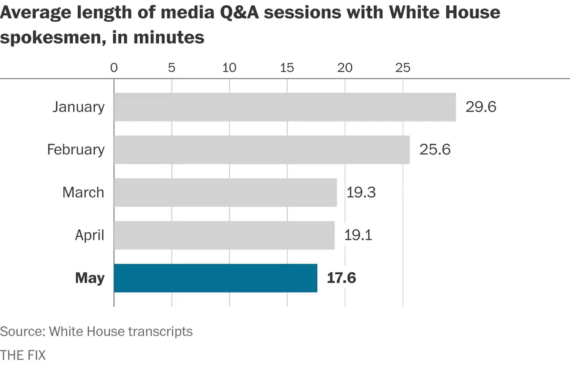 This isn’t the first time that the media has noticed that the press briefings under the Trump Administration were going to be far different from what we saw under previous Administration dating back to at least the Nixon Administration. Instead of the often intense back-and-forth between members of the White House Press Corps and the Press Secretary or their Deputy, many of which would last a considerable period of time, the briefings conducted by Sarah Huckabee Sanders and her Deputy Raj Shah, and before them by Sean Spicer, have gradually become shorter and less informative at the same time that they have become more vitriolic. Additionally, the briefings have become less frequent. At this time last year, for example, there was nearly a month-long period during which Spicer, who had yet to be dismissed, did not conduct public briefings at all, instead preferring to deal with the press in off-camera, and sometimes off-the-record, press gaggles where reporters get a short period of time to answer questions. When Sarah Huckabee Sanders took over, the briefings became more frequent for a short period of time, but eventually, she returned to Spicer’s form and there would be weeks where there might only be one or two briefings a week at best.

Over the eleven months or so that Sanders has been Press Secretary, she has proven to be quite effective in finding ways to shorten the length of time she has to stand before the podium answer questions. One method has been to bring other members of the Administration before the Administration to the briefing, including Cabinet members, and have them announce some new policy initiative and answer press questions. This means that she has a convenient excuse for cutting short the length of her own portion of the briefing. Additionally, Sanders has made a habit of essentially ignoring follow-up questions and failing to call on reporters who have gained a reputation for asking tough questions, such as CNN’s Jim Acosta. Instead, she has made it a habit of calling on reporters from foreign news organizations, who tend to ask questions of concern to their country of origin, or from one of the “friendly” news organizations that have gained credentials since the Trump Administration took office, such as the One America News Network, a conservative outlet that has gained prominence during the Trump Era. Finally, as noted in the linked article, Sanders has adopted the habit of scheduling the briefing just before some other significant White House event that the press will be covering, thus giving her an excuse to cut the briefing short. On such days, the briefing can be as short as fifteen minutes during which she answers, at most, four or five questions.

In response to all of this one could say, I suppose, that the White House Press Briefing has always been of dubious value to begin with. It typically comes down to little more than a contest where the press tries to ask questions and the person at the podium pretends to answer them and usually only becomes relevant and newsworthy when there’s some story in the news in which the response from the White House plays an important role. As a general rule, though, this isn’t usually the case and I’ve often questioned why the cable networks have felt compelled to cover it live seemingly every day of the Trump Administration. I don’t recall this being a common practice during the Obama or previous Administrations except when there was some item in the news on which one would expect a response from the White House. Instead, the briefing would usually be covered on one of the iterations of C-Span and the networks would show relevant excerpts, if there were any, afterward. Given the fact that Sanders has made the briefings less and less informative as time has gone on, one wonders why the networks still cover them at all.

If nothing else, what we’re seeing with the press briefing is emblematic of what is happening with the Trump Administration overall. Slowly but sure, this has become one of the least transparent in the modern era. As of today, it has been 474 days since the President last held a full and formal press conference. In its place, we’ve gotten joint conferences with visiting foreign leaders during which questions are limited and only granted to pre-selected journalists, press pool photo opportunities in which reporters shout questions at the President while he answers only what he chooses to answer, and short exchanges on the White House South Lawn as Marine One’s engines roar in the background awaiting the President’s imminent departure. The result has been that the White House has become more closed-off than any recent memory. Indeed, if it weren’t for all of the people inside the White House leaking to the press, a practice that has continued despite numerous departures, we’d know almost nothing about what is going on in the White House outside of the official talking points delivered by the White House.

As the article above indicates, it’s unlikely that the press briefing will disappear entirely. Trump in particular likes to control the press narrative as much as he can, and other than his Twitter feed this is one of the most effective means of doing so. That being said, we’re at the point where these briefings are becoming less and less relevant to the daily news cycle and where the ability of the media to ask tough questions is quickly becoming non-existent. If that’s going to be the case going forward then perhaps the networks need to reconsider whether its worth covering live anymore. 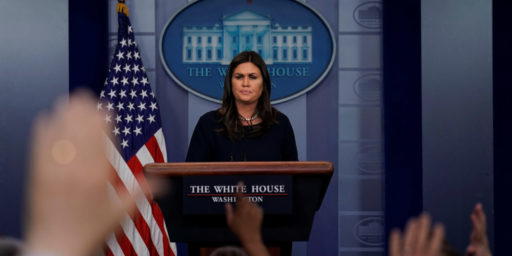 Sarah Huckabee Sanders On The Way Out