The Six States That Will Likely Decide The 2012 Election

Six states are likely to decide the 2012 election. 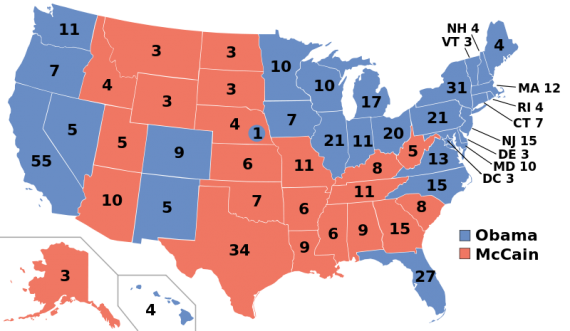 Matt Drudge, along with several conservative bloggers, is hyping the latest release of  Scott Rasmussen’s Daily Tracking Poll purporting to show both Mitt Romney and Rick Santorum leading President Obama in a nationwide poll. Of far more interest, I submit, is a poll that Rasmussen released yesterday showing  the President leading both candidates in four states the GOP must win in order to win in November:

President Obama now holds modest leads over Mitt Romney and Rick Santorum in combined polling of key swing states Florida, North Carolina, Ohio and Virginia. The numbers mark a shift from late February when Obama was tied with both candidates in the four states.

Obama is now ahead of the former Massachusetts governor 46% to 42%. Six percent (6%) prefer some other candidate in this matchup, and six percent (6%) are undecided.

We live, of course, in a country where the winner of the Presidential election is the person who gets the majority of votes in the Electoral College, not the winner of the popular vote. Among other things, that means that national polling doesn’t necessarily tell us much of anything, especially as we get closer to the election in November.

In 2008, President Obama was able to win election in part because he won in states that had been traditionally Republican such as New Hampshire, Indiana, Virginia, and North Carolina , as well as picking up the still-crucial swing states of Florida and Ohio. This time around, the only way the GOP can win the Presidency is by picking up a good portion of those states, and specifically by picking up the core four states that are part of Rasmussen’s poll.

When I saw this poll this morning, I immediately started playing around with various Electoral College scenarios at 270ToWin.com (a great site for political junkies, by the way) and it looks to me like, absent the unlikely event of a landslide, there is no way the GOP can win the Presidency without winning all four of these states. They can lose Iowa. They can lose New Hampshire. They can once again fail to flip New Mexico (which seems likely given their problems with the Latino vote). But, even under the most optimistic scenario there is no way they can afford to lose any one of these states. (Nevada is another state the GOP may try to flip this year but it’s six Electoral Votes are unlikely to be the deciding factor in this race)

The task becomes more difficult, of course, if the GOP somehow manages to lose a state that they won in 2008. For example, John McCain won Missouri in 2008 by the narrowest of margins, just 3,903 votes. Right now, due in large part to the fact that the state has definitely shifted red in the past three years I’m going to assume that the GOP holds on to the state. Similarly, the GOP lost Indiana in 2008 for the first time since 1964 but there’s plenty of reason to believe that the state will return to the Republican fold this year. If one or both of those states ends up in Obama’s column, then winning the “Core Four” won’t matter at all.  So, perhaps it’s better to say that the GOP must hold on to all of the states it won in 2008 and flip Indiana and the “Core Four.” If it doesn’t do that, Barack Obama will be re-elected.

So, if you’re looking for numbers to pay attention to over the coming eight months, these are the six states — Ohio, Indiana, Missouri, Virginia, North Carolina, and Florida — to keep an eye on because they’re likely to decide the election.