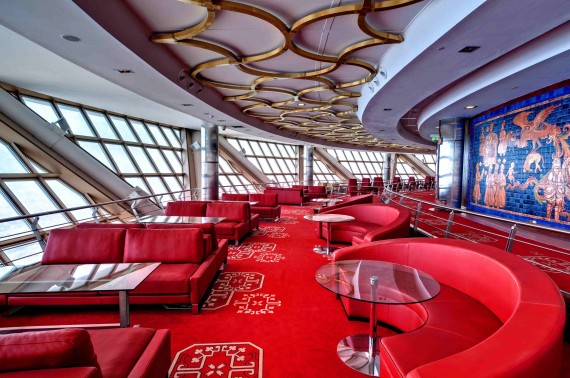 There’s an interesting article from yesterday’s Washington Post about the gap between Iranian elites and the rest of the country:

TEHRAN — Gold-flecked ice cream wasn’t part of the picture that Shiite Muslim clerics painted during the Iranian Revolution, when they promised to lift the poor by distributing the country’s vast oil income equally across society.

But more than three decades later, record oil profits have brought in billions, and some people here are enjoying that decadent dessert. The trouble is, it’s just a small group of wealthy Iranians. Despite the promises of the revolution, many here say the gap between rich and poor has never seemed bigger.

Iran’s new wealthy class has succeeded in tapping the opportunities provided by a vast domestic market, sometimes aided by corruption and erratic government policies. It includes children of people with close connections to some of Iran’s rulers, as well as families of factory owners and those who managed to get huge loans from state banks at low interest rates. The trickling down of the oil windfall — nearly $500 billion over the past five years — has also played a central role in establishing this small group that is visibly enjoying its profits.

Both supporters and critics of President Mahmoud Ahmadinejad say some of his economic policies designed to counter inequality are actually making things worse for many. And although some statistics show the gap between the Islamic Republic’s rich and poor has been stable over time, scenes of the rich flaunting their wealth have left many Iranians complaining.

The new wealthy are buying Porsches, getting caviar delivered to late-night parties, and eating $250 ice creams covered in edible gold at what’s billed as the highest rotating restaurant in the world.

From the top of Tehran’s 1,427-foot-high Milad Tower, Iran’s poor are reduced to tiny dots, swarming in the streets below.

“We provide a calm and luxurious atmosphere, away from Tehran’s daily problems,” said Ahmad Talaee, one of the owners of the Crown restaurant, as he received guests in the VIP section, with room for nearly 300 to enjoy $280 fixed-price menus, golden ice cream not included.

Construction workers in worn-out shoes waited in the hallway one recent afternoon to make final fixes at the restaurant, which opened in June, as a young couple in designer clothes fed each other shrimp flown in from the Persian Gulf. “As you can see,” the owner said, “we are re-creating the fairy tales of the legendary stories of ‘1,001 Nights’ right here in Tehran.”

But that ritzy lifestyle, set against a backdrop of increasing economic hardship for millions of ordinary Iranians, is leading to open criticism.

People are writing open letters complaining about the rise in inequality. Influential conservative blogger Amir Hossein Sabeti wrote last month that the shift in the way Iranians conduct themselves in public, increasingly ignoring the soberness that the revolution prescribed, is a bigger threat to Iran’s ideology than the United States or Israel.

“How can we discuss decency, simplicity and support for the oppressed when we have this culture of ostentatiously showing off wealth?” he asked. “Woe unto us the day that our policies stop supporting the needy, but support the wealthy,” he wrote, quoting famous words from the late founder of the Islamic Republic, Ayatollah Ruhollah Khomeini.

The extent of the gap is laid out fairly starkly in a new study from the Brookings Institution:

The most obvious, if not quantitatively most important, source of inequality in Iran is the rural-urban differential. Figure 1 shows that during the great economic downturn of 1984-88, average expenditures in rural and urban areas fell by 20% and 33%, respectively, narrowing the rural-urban gap in expenditures. Rural incomes continued to grow faster than urban, raising the rural-urban ratio to a historic high of 69% in 1990, before falling back to 53% in 2006. The widening rural-urban gap in the last 15 years has contributed significantly to the resilience of measured inequality in the country as a whole.

Immediately following the Revolution, overall inequality fell substantially, by about 10 Gini points, from 0.56 to 0.46,[1] but has since remained fairly stable at levels well above those observed in countries such as Egypt (see Figure 2). It is nonetheless much lower than in Latin America. Rural inequality, which was much lower than urban inequality during the war years (1980-88), increased sharply after the war, reaching the urban level, most likely because of government policies such as ending the rationing (that had protected the poor from inflation during the war) and permitting a greater role for markets in setting prices.

Significantly, during the first two years of the Ahmadinejad Administration (2005-06) inequality worsened in both rural and urban areas, possibly because higher inflation hurt those below the median income level more than those above it. This is not so much an indication that Ahmadinejad was insincere in promising redistribution but how difficult it is to redistribute income without fundamental changes in the country’s distribution of earning power (wealth and human capital) and political power, which determines access to government transfers from oil rent.

And, of course, its the people who political power who just happen to be the ones eating the gold-flecked ice cream and living a lifestyle that, for all purposes, seems little different than what it might have been under the Shah, while ordinary Iranians look in from the outside:

At the Milad Tower, ordinary Iranians can buy $20 tickets to ride an elevator to the main observatory, with dramatic views of the capital, and, through tinted double glass, a close-up of the restaurant’s VIP section.

Inside, the expensive menu was a source of pride. “We work hard here,” said Talaee, as he asked a waiter to describe the ice cream, which also includes edible silver and caviar. “People have the right to do what they want with their money. That has nothing to do with politics.”

These are the kinds of disparities that caused revolution in countries like Egypt.