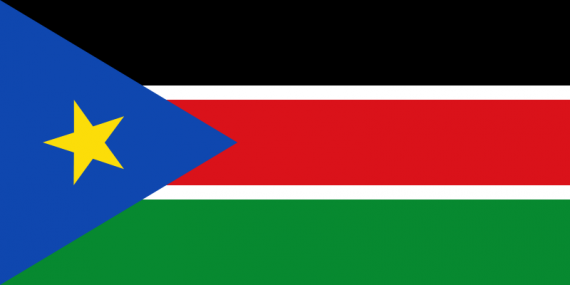 After years of civil war, the southern regions of Sudan are now their own country:

JUBA, South Sudan — The celebrations erupted at midnight. Thousands of revelers poured into Juba’s steamy streets in the predawn hours on Saturday, hoisting enormous flags, singing, dancing and leaping on the back of cars.

A new nation was being born in what used to be a forlorn, war-racked patch of Africa, and to many it seemed nothing short of miraculous. After more than five decades of an underdog, guerrilla struggle and two million lives lost, the Republic of South Sudan, Africa’s 54th state, was about to declare its independence in front of a who’s who of Africa, including the president of the country letting it go: Omar Hassan al-Bashir of Sudan, a war-crimes suspect.

From the mid-1950s, even before Sudan shook off its colonial yoke in 1956, the southern Sudanese were chafing for more rights. Sudan had an unusually clear fault line, reinforced by British colonizers, with the southern third mostly animist and Christian and the northern part majority Muslim and long dominated by Arabs.

The southern struggle blew up into a full-fledged rebellion in the 1960s and then again in the 1980s, and the Sudanese government responded brutally, bombing villages and unleashing Arab militias that massacred civilians and enslaved southern Sudanese children. Many of the same scorched-earth tactics associated with the crisis in Darfur, in Sudan’s west, in the mid-2000s, were tried and tested long before that here in southern Sudan. (The International Criminal Court has indicted Mr. Bashir on genocide charges for the Darfur massacres.)

The central government also sowed divisions among the southerners, turning ethnic groups against one another. Some of the most unspeakable violence, like the Bor massacre in 1991 when toddlers were impaled on fence posts, was internecine.

Christian groups had been championing the southern Sudanese since the 19th century. And their efforts paid off in 2000 when George W. Bush was elected president of the United States. He elevated Sudan to the top of his foreign policy agenda, and in 2005, the American government pushed the southern rebels and the central government — both war weary and locked in a military stalemate — to sign a comprehensive peace agreement that guaranteed the southerners the right to secede.

On Saturday, one man held up a sign that said “Thank You George Bush.”

The American-backed treaty set the stage for a referendum this January in which southerners voted by 98.8 percent for independence.

At 1:20 p.m. on Saturday, the southerners officially proclaimed their freedom.

“Recalling the long and heroic struggle of our people,” began the legislative speaker, James Wani Igga.

A few minutes later, the flag of Sudan was lowered and the new South Sudan flag (actually quite similar, plus a star) was raised. The masses exploded in one loud roar.

Not surprisingly given American involvement in the referendum, the United States quickly established diplomatic relations with the new nation, as did many European and African countries.

As Maggie Fick notes at Foreign Policy, though, today’s jubilation could be short-lived given the struggles facing the young country:

Managing the aftermath of its “divorce” from the north won’t be easy for the young government here, particularly given the ongoing hostilities along the contested border. African Union-supported negotiations between north and south Sudan ground to a halt once again this week in the Ethiopian capital of Addis Ababa, meaning the official split will take place without any deal to settle the future of Sudan’s oil wealth. The dominant role oil revenues play in both countries’ economies — particularly the south’s — mean that the weeks and months ahead may well be marked by uncertainty and brinkmanship, a characteristic trait of Sudanese politics that has historically produced mixed results for peace and stability.

Foreign relations aside, even domestic security poses a monumental risk for the new country. Many ordinary citizens of South Sudan harbor legitimate grievances against the Sudan People’s Liberation Movement (SPLM), which has governed the country during the past six years of fragile peace, for its exclusionary and repressive policies. In the remote but strategic oil-producing areas of the south, for example, local officials have recently been sacked for speaking out against recent fighting between the national army and local militias — fighting that has driven many locals from their homes. In Juba, meanwhile, motorcycle-taxi drivers and market vendors routinely risk arbitrary arrest by disorganized and often predatory security forces that routinely harass, intimidate, and solicit bribes from citizens.

The biggest threat, though, could come from the inside:

Ultimately, it’s that national army that will be the greatest barometer for progress in South Sudan. The Sudan People’s Liberation Army (SPLA) has its roots in a guerrilla movement that human rights groups and ordinary citizens hold responsible for egregious violations against its own people. Only if the army is reformed will it be able to serve as a solid foundation for a country that shares dangerous borders with conflict-ravaged countries like the Democratic Republic of the Congo and the Central African Republic, not to mention Sudan. To that end, the U.S. government is spending approximately $40 million per year to professionalize the army. That money is being use to fund the construction and operation of army hospitals, to pay the salaries of Ethiopian troops training future elite southern forces, and even to improve the English-language skills of the soldiers, many of whom missed out on schooling, spending their childhood years fighting a bush war.

But the United States is not yet doing enough to monitor what’s being done with its funding. Despite State Department efforts to closely follow the work of the American military contractors it has hired to train and equip the SPLA, the army is still acting ruthlessly in its campaigns to rout anti-government militia forces out of three of the south’s oil-producing states. According to the United Nations, nearly 2,500 people have been killed this year by the violence.

The oil is probably the one thing that the new nation has going for it, but its also the thing that could tear it apart. Given the history of African independence, they’re going to need some luck.

Sudan Aids in War on Terror