The Nanny State at Work

Via Radley Balko comes this story of local government hubris.

A recent court order is forcing Fred Krueger to finally get rid of his prized flock of pigeons.

Krueger hasn’t raced his flock of the some 100 homers since September 2002, when the city ordered the birds confined to their lofts. Now, the pigeons must be removed by July 15 because neighbors consider them a nuisance.

The city first enacted a no-flying rule in 1994 and completely banned the birds in 2002.

What is really amazing is the following quote from city Administrator Lisa Kotter,

“We don’t have to have a reason. Cities do have the right to regulate licensing and zoning,” Kotter said. “Sometimes we change the rules.”

Right, they don’t need a reason like preventing the return of Snowball or some other dread thing. 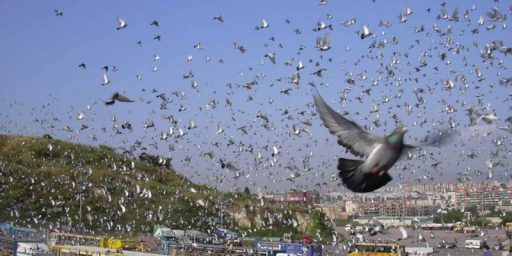