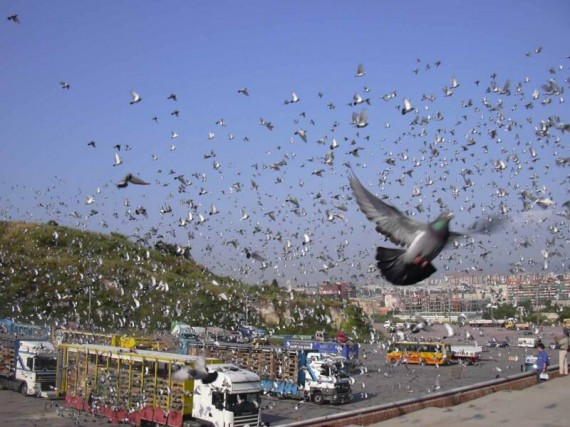 Performance enhancing drugs have, bizarrely, found their way into the world of competitive pigeon racing:

They would blame anyone but themselves.

But that’s only if they could talk — which they can’t. That is because the latest doping scandal in sports does not involve Tour de France-winning cyclists or All-Star third basemen or Olympic sprinters. This one is about birds.

The world of pigeon racing was rocked to its core this week — no joke — when six Belgian birds failed tests for banned performance-enhancing drugs.

According to multipl.e news reports, five birds tested positive for a human painkiller that combats inflammation, and another tested positive for cocaine. Top officials at an association of pigeon fanciers in the country said they were shocked at the news.

Others in the sport said that they were not surprised that pigeons had been caught doping because pigeon racing has gained in popularity in recent years, becoming a big-money, even a glamorous, endeavor. Last May, a pigeon named Usain Bolt — for the Olympic sprinting champion from Jamaica — was sold to a Chinese businessman for about $430,000.

We can only pretend to know what evils exist within the downy underbelly of pigeon racing, but it could be fun to guess. So let’s make something up:

The identities of the birds who tested positive are not known. Two people briefed on the situation, however, said that pigeons named Ben Johnson, Marion Jones and Lance Armstrong were under suspicion. The two people did not want their names published because they did not want to be seen as violating pigeon racing’s well-known code of silence, which for decades has kept the sport’s culture of doping out of the public’s eye.

I wonder if one of them is named Lance Armstrong.