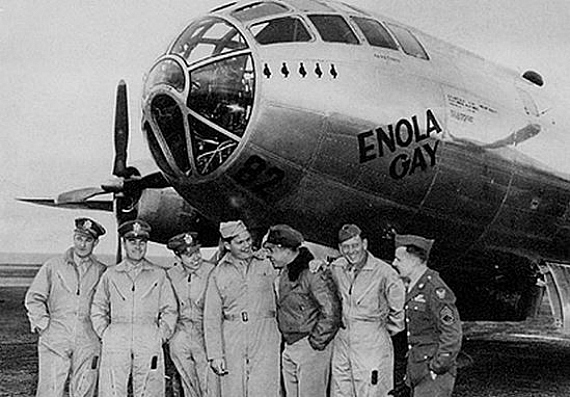 The last surviving member of the crew that piloted the Enola Gay on August 6, 1945 when it dropped the first atomic bomb used in war in history on Hiroshima, Japan, has died at the age of 93:

Theodore (Dutch) Van Kirk, the navigator and last surviving crew member of the Enola Gay, the B-29 Superfortress that dropped the atomic bomb on Hiroshima in the last days of World War II, died on Monday at his home in Stone Mountain, Ga. He was 93.

His son Thomas confirmed the death.

In the predawn hours of Aug. 6, 1945, the Enola Gay, piloted by Col. Paul W. Tibbets Jr. and carrying a crew of 12, took off from Tinian in the Mariana Islands with a uranium bomb built under extraordinary secrecy in the vast Manhattan Project.

Captain Van Kirk spread out his navigation charts on a small table behind Colonel Tibbets’s seat. From that spot, at the end of a long tunnel atop the bomb bays, he took the plane’s bearings, using a hand-held sextant to guide with the stars.

The bombardier, Maj. Thomas W. Ferebee, said, “I got it,” announcing that the Enola Gay was over his aiming point, the T-shaped Aioi Bridge. Captain Van Kirk, who had also familiarized himself with Hiroshima’s landmarks, leaned over Major Ferebee’s shoulder and confirmed he was correct. His navigating skills had brought the Enola Gay to its target only a few seconds behind schedule at the conclusion of a six-and-a-half-hour flight.

Major Ferebee released the bomb, known as Little Boy, and 43 seconds later, at 1,890 feet above ground zero, it exploded in a nuclear inferno, leaving tens of thousands dead or dying and turning Hiroshima into scorched devastation.

Colonel Tibbets executed a diving turn to avoid the blast effects, but the Enola Gay was buffeted by a pair of shock waves. A flash of light that Mr. Van Kirk likened to a photographer’s flashbulb engulfed the cabin.

“The plane jumped and made a sound like sheet metal snapping,” Mr. Van Kirk told The New York Times on the 50th anniversary of the Hiroshima raid. “Shortly after the second wave, we turned to where we could look out and see the cloud, where the city of Hiroshima had been.”

He added: “The entire city was covered with smoke and dust and dirt. I describe it looking like a pot of black, boiling tar. You could see some fires burning on the edge of the city.”

“Even though you were still up there in the air and no one else in the world knew what had happened, you just sort of had a sense that the war was over, or would be soon,” he told Bob Greene in Mr. Greene’s 2000 book, “Duty.”

Shortly before 3 p.m., the crewmen returned to Tinian and were greeted, as Mr. Van Kirk told it, by “more generals and admirals than I had ever seen in one place in my life.”

The crews that dropped the atomic bombs on Hiroshima and Nagasaki were seen by Americans as saviors for ending the war. But over the years, the morality of atomic warfare and the need for the bombings has been questioned.

“We were fighting an enemy that had a reputation for never surrendering, never accepting defeat,” he said. “It’s really hard to talk about morality and war in the same sentence.”

He continued: “Where was the morality in the bombing of Coventry, or the bombing of Dresden, or the Bataan Death March, or the Rape of Nanking, or the bombing of Pearl Harbor? I believe that when you’re in a war, a nation must have the courage to do what it must to win the war with a minimum loss of lives.”

Kirk is right, of course, and he deserves thanks for the service he provided to his country. Somewhat ironically, in one week, we will mark the 69th anniversary of the bombing of Hiroshima.