President Obama's visit to Hiroshima left just the impression it should have. 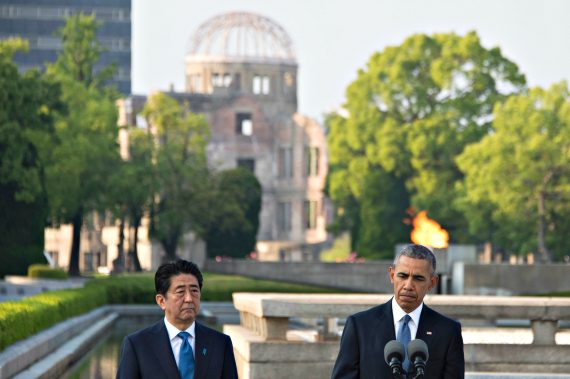 President Obama became the first sitting American President to visit the memorial at Hiroshima, Japan, the site of the first use of an atomic weapon in war, and while he did talk of the ambition of a world without nuclear weapons and the lessons we can draw from what happened there, he was careful not to apologize for the bombing:

HIROSHIMA, Japan — President Obama laid a wreath at the Hiroshima Peace Memorial on Friday, telling an audience that included survivors of America’s atomic bombing in 1945 that technology as devastating as nuclear arms demands a “moral revolution.”

Thousands of Japanese lined the route of the presidential motorcade to the memorial in the hopes of glimpsing Mr. Obama, the first sitting American president to visit the most potent symbol of the dawning of the nuclear age. Many watched the ceremony on their cellphones.

“Seventy-one years ago, on a bright cloudless morning, death fell from the sky and the world was changed,” Mr. Obama said in opening his speech at the memorial.

“Technological progress without an equivalent progress in human institutions can doom us,” Mr. Obama said, adding that such technology “requires a moral revolution as well.”

In an emotional moment afterward, Mr. Obama embraced and shook hands with survivors of the attack, which exposed humanity to risks the president has repeatedly said the world must do far more to resolve.

The first of those survivors, Sunao Tsuboi, a chairman of the Hiroshima branch of the Japan Confederation of A- and H-bomb Sufferers Organizations, gripped Mr. Obama’s hand and did not let go until he had spoken to him for some time.

“I held his hand, and we didn’t need an interpreter,” Mr. Tsuboi, 91, said later. “I could understand what he wanted to say by his expression.”

In another poignant moment, Mr. Obama exchanged an embrace with Shigeaki Mori, 79, who was 8 years old when the bomb fell. Mr. Mori spent decades researching the fates of American prisoners of war who were killed in the bombing.

For weeks, the White House had refused to say whether Mr. Obama, would meet survivors. It was a delicate decision. Many survivors long for an apology for an event that destroyed just about everyone and everything they knew, and there were small demonstrations near the ceremony on Friday by protesters demanding an apology. But Mr. Obama said before his trip that he would not apologize for the attack.

Still, Mr. Obama’s homage to the victims and his speech were welcomed by many Japanese. “I am simply grateful for his visit,” said Tomoko Miyoshi, 50, who lost 10 relatives in the Hiroshima attack and wept as she watched Mr. Obama on her cellphone.

In his speech, Mr. Obama, using the slow and deliberate cadence that he uses on only the most formal and consequential occasions, said that the bombing of Hiroshima demonstrated that “mankind possessed the means to destroy itself.”

But he said that in the 71 years since the bombing, world institutions had grown up to help prevent a recurrence. Still, nations like the United States continue to possess thousands of nuclear weapons. And that is something that must change, he said.

In a striking example of the gap between Mr. Obama’s vision of a nuclear weapons-free world and the realities of purging them, a new Pentagon census of the American nuclear arsenal shows his administration has reduced the stockpile less than any other post-Cold War presidency.

“We must have the courage to escape the logic of fear and pursue a world without them,” he said, although he quickly added: “We may not realize this goal in my lifetime, but persistent effort can roll back the possibility of catastrophe.”

“The world was forever changed here, but today the children of this city will go through their day in peace,” Mr. Obama said. “What a precious thing that is. It is worth protecting, and then extending to every child. That is a future we can choose, a future in which Hiroshima and Nagasaki are known not as the dawn of atomic warfare but as the start of our own moral awakening.”

Here’s the video of President Obama’s remarks, along with the prepared text:

In advance of the President’s visit, it was made clear that the President would not be offering an apology for the bombing, nor would their be any suggestion that the decision made by President Truman should be reexamined based on the distance of seven decades. For several reasons, that strikes me as both a reasonable and correct decision for both practical and historical reasons. Practically speaking, such an apology would have resulted in real political repercussions both back home in the United States. Domestically, the World War II generation may be shrinking but it is still an important constituency and our involvement in the war a subject that continues to arouse real passions even among Americans who were not alive at the time. After all, from the American point of view the United States might never have gotten involved in a war in the Pacific if Japan had not engaged in a sneak attack on Pearl Harbor that resulted in thousands of deaths and stands along with the September 11th attacks as the only time in recent memory when the American homeland was attacked in a act of war. Everything that followed after that is largely seen by most Americans as a necessary consequence of what Japan did in December 1941. Additionally, the fact that the Japanese have never really apologized for the attack on Pearl Habor, or for the brutal treatment of American prisoners of war would have made an apology a big political mistake on Obama’s part. Internationally, an apology for one of the acts that helped bring the war in the Pacific Theater to an end would have caused problems for America’s relationship with South Korea and China, both of whom suffered long and brutally under the rule of Imperial Japan, events for which the Japanese have also not completely apologized for much to the frustration of most of its neighbors. At a time when the United States is relying on these nations, and on Japan, to stand against North Korea in a united front, an apology would have only needlessly complicated an already complicated situation.

Additionally, there is plenty to support the argument that no apology is necessary for the atomic bombings of Hiroshima and Nagasaki. At the time he made the decision to approve the bombings Truman was being told by advisers that Japan was refusing to comply with demands for unconditional surrender notwithstanding the fact that the United States had largely completed the encirclement of the Japanese homeland and was clearly preparing for a land invasion. Even events such as the bombing campaign against Tokyo, which resulted in nearly as many casualties as the bombing of Hiroshima, failed to persuade the nation’s military leaders to give up a war that was clearly lost. Had the atomic bombs not been used, then the likely next step would have been a multi-step invasion of the Japanese home islands that would have resulted in millions of Japanese military and civilian deaths as well as significant casualties on the allied side. Given that option, the decision to utilize atomic weapons for the first time in the hope that this would hasten the end of the war was arguably the far more moral decision that Truman could have made. In the 70 years that have followed, historians have pushed back against these contentions at various times and argued that other options existed to force a Japanese surrender, but these are pronouncements made with the hindsight of history. Based on the information that was available to him at the time, it seems obvious that President Truman made the right decision. Yes, he let the nuclear genie out of the bottle, but that was likely to happen at some point anyway and the fact that the world got this demonstration of the destructive force of nuclear weapons has arguably helped contribute to the desire to prevent their being used in the future and limit the spread of nuclear weapons technology. To that extent, Truman likely did the world a favor.

Beyond the lack of an apology, President Obama’s remarks today strike me as largely appropriate under the circumstances. Enough time has passed that it was appropriate for an American President to come to Hiroshima and address what happened there, and he did so in a manner that both recognizes the importance of the event in world history and the context in which it occurred. There has been some push back against his talk about a world free of nuclear weapons, but it’s worth noting that this is a goal that President Reagan also had, and one that other Presidents have mentioned a well. No doubt, President Obama recognizes that this is rhetoric at best and a goal that, assuming it can and should be achieved, is a long way off. In the meantime, it was good that an American President could visit Hiroshima while some survivors are still alive. Perhaps the Prime Minister of Japan should consider scheduling similar visits to Pearl Harbor, Nanking, and other parts of the world where Imperial Japan’s brutality was inflicted on the world.