Those CIA Guys Are Crafty, Eh? 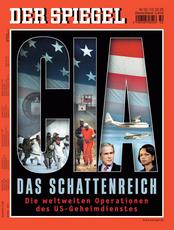 “Another highlight of Germany’s #1 investigative journalism magazine: the current edition of left-wing, fiercly anti-American SPIEGEL presents an article on “THE EMPIRE OF SHADOW – The worldwide operations of the U.S. Secret Intelligence Service”, and the picture on the cover shows … members of the Canadian military!”

Medienkritik has the original photo of the Canadian JTF2 team.