Yesterday's apparent terrorist shooting in Ottawa reveals again a phenomenon that seems difficult if not impossible to stop in advance. 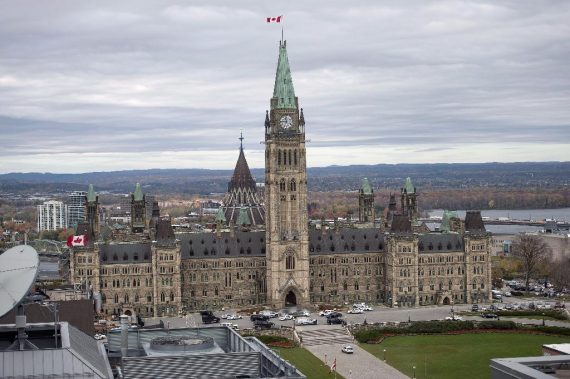 For most of the day yesterday, the area around Parliament Hill in Ottawa, Canada was locked down as tight as a drum as police and Federal authorities continued a search related to the shooting that occurred yesterday at the Canadian War Memorial and the shooting spree that echoed through the halls of Parliament, forcing M.P.’s, Senators, and members of the press into lockdowns in various parts of the building that weren’t completely lifted until nearly twelve hours after the attack. Within hours, we knew that at least one person, a Canadian Armed Forces Reservist named Corporal Nathan Cirillo had been killed in the initial minutes of the incident. The one known shooter, it turns out, had been killed within minutes of entering the building via an entrance reserved for members and the press that apparently wasn’t very heavily guard by the quick-thinking Sgt. At Arms Kevin Vickers, a former member of the Royal Canadian Mounted Police. As with similar incidents here in the United States, though, for hours there were rumors and speculation that there had been more than one shooter involved in the incident, as well as reports of more incidents in the area immediately around Parliament Hill, that caused the police to keep their search for an “active shooter” alive for much of the day. By the time the day was over, it seemed clear that the shooter, who was identified as Michael Zehaf-Bibeau, a 32 year old with an apparent history of petty and drug related crimes who had recently converted to Islam and had been born Michael Joseph Hall before converting to Islam, had acted alone. In a speech last night, Prime Minister Stephen Harper declared the shooting an act of terrorism and tied it to an incident earlier in the week in Quebec where a man in a car deliberately ran down two members of the Canadian military, killing on eo of them, and it’s hard to disagree with him that this attack does have all the markers of a terrorist attack. What remains unknown at this point is what his motives were, whether he was motivated by some desire to be part of a terror campaign in the way the Boston Marathon bombers had been, or whether he was working in concert with or had any contact with anyone overseas.

Despite all of those unanswered questions, though, the incident has left Canada shocked and could have implications for Western policy in the Middle East going forward:

OTTAWA — A sudden spasm of violence jolted the government center of Canada’s capital on Wednesday morning, as a gunman killed an honor guard soldier at a war memorial and then opened fire inside the nearby Parliament building, triggering a lockdown and hours of confusion in Ottawa.

The assault shocked a country that rarely experiences gun violence but has witnessed two attacks on members of its armed forces in recent days. Earlier this week, a soldier was killed in a hit-and-run that authorities have called an act of terrorism. In each case, the soldiers were targeted by individuals who had been barred from traveling abroad by Canadian authorities.

“We will not be intimidated. Canada will never be intimidated,” Prime Minister Stephen Harper said Wednesday night in an address to the nation.

The gunman in Wednesday’s assault was identified as Michael Zehaf-Bibeau, a 32-year-old from Montreal, according to two U.S. law enforcement officials. He had recently been designated a “high-risk traveler” by the Canadian government and had his passport seized, the Globe and Mail reported. Later in the day, a U.S. law enforcement official said the gunman, a convert to Islam, had changed his name to Michael Zehaf-Bibeau from Michael Joseph Hall. He was also known as Abdullah Zehaf-Bibeau, the official said.

Shortly before 10 a.m., Zehaf-Bibeau, dressed in black, his face covered by a scarf, shot at point-blank range a soldier guarding the National War Memorial, according to eyewitnesses quoted in the Canadian media. The soldier was identified as Cpl. Nathan Cirillo, a member of the Argyll and Sutherland Highlanders, a reserve force regiment.

“He was an amazing guy,” said Michelle Howlett, 25, of Mississauga, who said she briefly dated Cirillo this summer. “He was a real sweetheart. He had a son and was a real great father. . . . He was an exceptional person. I can’t even believe this.”

Canadian authorities did not immediately tie the attack to terrorism. But it came two weeks after Parliament voted in favor of Canadian participation in the U.S.-led coalition’s campaign against Islamic State militants in Iraq, and only days after a person — called a “radicalized” Canadian convert to Islam by the RCMP — struck two members of the Canadian military with his car in a Quebec parking lot, killing one of them.

The driver, named by authorities as Martin Couture-Rouleau, 25, was killed by police after a high-speed chase.

Police said Couture-Rouleau had been on a list of people being monitored by authorities as part of ongoing national security investigations. They said his passport was seized in June when he was prevented from boarding a commercial airliner to travel to Turkey, a route frequently used by militant recruits heading to Syria. Officials said they did not have sufficient cause to arrest him at that time.

The two attacks this week followed an Oct. 7 vote in Canada’s Parliament authorizing Harper to send Canadian forces to Iraq, where the United States, along with Persian Gulf and European allies, is conducting airstrikes against the militants in support of Iraqi security forces.

In a speech to lawmakers, Harper said that Canada would not deploy ground troops and noted that the Islamic State “has specifically targeted Canada and Canadians” and vowed “that we should not feel secure, even in our homes.”

While Zehaf-Bibeau’s motives and history remain unclear at this point, the incident has also raised the issue of Islamic extremism in Canada itself, which has been an issue of concern for Canadian and American authorities since September 11th and which seems to have been enhanced with recent concerns about westerners either going overseas to fight alongside ISIS forces, or making some effort to do so:

The threat of a “lone wolf” attack is a top concern for Western security agencies, including Canada’s. “Terrorism remains the leading threat to Canada’s national security,” wrote Steven Blaney, minister of public safety and emergency preparedness, in a September report on the terrorist threat to the country.

“As of early 2014, the government was aware of more than 130 individuals with Canadian connections who were abroad and who were suspected of terrorism-related activities,” the report said.

While the idea that individuals are leaving their country of residence to take up arms in a foreign conflict is hardly new or unique to Canada, the report found that the number of people choosing to do so had picked up pace in recent months.

“Some extremist travelers remain abroad,” the report said. “Others have returned to Canada, while still others are presumed dead.” It said at least 30 “individuals with a Canadian connection” were involved in terrorist-related activity in Syria.

Michel Coulombe, the director of the Canadian Security Intelligence Service, told lawmakers this month that the authorities were also looking into the activities of 80 people who had been radicalized, had traveled overseas and had returned home.

He said the government knew who these individuals were and where they were.

But he also cautioned calm, saying there was no intelligence indicating an imminent attack.

We’ve had our own version of the “lone wolf” attack here in the United States, of course. Most infamously, the Tsarnaev brothers acted largely alone to construct homemade bombs using readily available material that killed five and injured nearly 300 people at the Boston Marathon. While the elder brother had traveled to the Chechen region of Russia in the year before the attack where he apparently became radicalized and in turn radicalized his younger brother, there was no evidence that the attack was part of any broader conspiracy or that it had even been ordered, planned, or suggested by anyone outside of the tight circle of the two brothers. Less successfully, in 2010 Faisal Shahzad was captured in Times Square after having left a car packed with explosives in the middle of the heavily traveled area on a Saturday night. As it turns out, the bomb had not been constructed properly, but again Shahzad was someone who had traveled overseas prior to the attack and apparently trained in some way at a camp in Pakistan, but the attack appears to have been his idea and something which he carried out on his own. There have also, of course, been a number of attack plots broken up in the years since 9/11 by people similar to the Tsarnaev’s and Shahzad who were apparently inspired by Islamist rhetoric but were not working in concert with anyone overseas, although many of those plots ended up being law enforcement sting operations. If, as suspected, yesterday’s attack turns out to be another “lone wolf” attack, though, it will join a list of similar incidents in western nations in recent years by so-called “lone wolves.”

While much smaller in impact than a mass terror attack like 9/11, the Madrid train bombings, or the London bombings in 2005, they pose particular challenges precisely because they aren’t tied to any outside groups. As with the other incidents, there doesn’t appear to have been any warning about yesterday’s attack that Canadian law enforcement or intelligence authorities could have acted on. Certainly, the call from an Imam overseas for Canadian Muslims to rise up against the government is something that caused the nation to raise its level of concern, but there doesn’t seem to have been any indication that Zehaf-Bibeau was on anyone’s radar as a potential security risk, or that he had had any contact with anyone outside of Canada. The same, of course, was true of the Tsarnaev brothers outside of the fact that the elder brother had traveled to Russia, but even that fact wasn’t enough justification for the F.B.I. to conduct more than a cursory examination of the man, and would not have been sufficient legal justification to detain him or put him under more intense surveillance that may or may not have uncovered the plot that led to the bombing at the marathon. That means that the Tsarneav’s were able to carry out their attack without anyone being the wiser, and the same appears to have been the case with Zehaf-Bibeau.

The biggest problem with the lone wolf terrorist, of course, is that there doesn’t seem to be much that law enforcement can do about them. Attacks on terrorist sites overseas isn’t going to stop them, and indeed may only serve to inspire them to attack in the first place. Absent someone who may become aware of what they’re planning, or the rhetoric they’re using in private, who tips off the police, there’s almost know way to know that an attack might becoming. Related to the lone wolf issue, of course, is the question of westerners who have gone overseas to fight alongside of groups like ISIS and who could, thanks to their passports, return home and become lone wolves themselves. Obviously, its essential to identify who those people are and react accordingly, but the bigger danger may be from the guys like the Tsarnaev’s and Zehaf-Bibeau who float completely under the radar and only pop up when they’re ready to unleash an attack. There doesn’t seem to be much you can do to stop that.