President Trump is once again threatening to lower the tariff hammer on one of America's most reliable allies and biggest trading partners. 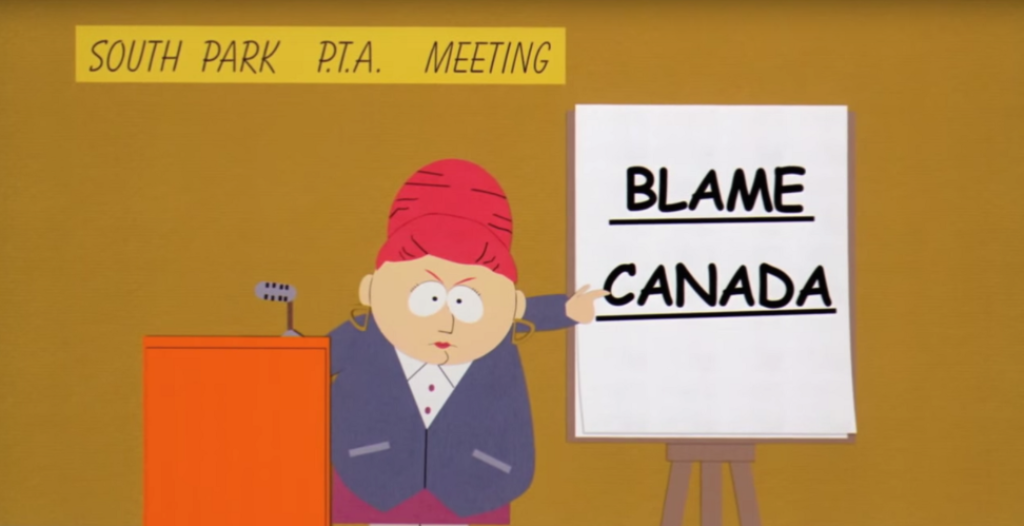 As another deadline nears for the ongoing efforts to renegotiate or amend the North American Free Trade Agreement, President Trump decided it was time to bash Canada again:

WASHINGTON — President Trump said he rejected a meeting with Prime Minister Justin Trudeau of Canada during the United Nations General Assembly this week and threatened on Wednesday to punish Canada by taxing the cars it exports into America, signaling a new low in relations between the two nations.

Mr. Trump’s comments come after months of tense trade negotiations between Canada and the United States have failed to produce an agreement and as the White House prepares to move ahead with a bilateral trade deal with just Mexico.

“Frankly, we’re thinking about just taxing cars coming in from Canada,” Mr. Trump said at a news conference on Wednesday. “That’s the mother lode. That’s the big one. We’re very unhappy with the negotiations and the negotiating style of Canada.”

Trade tensions between the United States and Canada have been rising for months, and relations between Mr. Trump and Mr. Trudeau have soured amid disagreements over the future of the North American Free Trade Agreement.

On Tuesday, Mr. Trump appeared to snub Mr. Trudeau when he did not stand to shake the Canadian prime minister’s hand during a lunch at the United Nations summit meeting. Mr. Trudeau said the two leaders did not meet because their schedules were full of meetings with leaders from far-flung countries.

But Mr. Trump did not offer a similar excuse, instead berating Canada over its negotiating style and its negotiator. “We don’t like their representative very much,” Mr. Trump said Wednesday, apparently referring to Chrystia Freeland, the Canadian foreign minister, who has been leading the Nafta talks for her country. Ms. Freeland has irked some in the administration by giving speeches suggesting that the United States, under Mr. Trump’s leadership, is turning its back on democratic values and its traditional role as a global leader.

Mr. Trump left open the possibility of reaching a deal with Canada, but said there would be no more Nafta.

“I don’t like Nafta. I’ve never liked it. It’s been very bad for the United States. It’s been great for Canada, great for Mexico,” Mr. Trump said, adding that he would rename the pact “U.S.M.C.” for United States-Mexico-Canada.

The Trump administration is expected to send Congress text of a new Nafta on Friday that does not include Canada, according to congressional aides and others familiar with the discussions, raising doubts about the ability to keep the 25-year-old trilateral pact intact.

One month after the United States and Mexico reached a bilateral trade deal, talks between American and Canadian officials have yet to produce a similar agreement, with significant differences unresolved.

Robert Lighthizer, Mr. Trump’s top trade negotiator, said on Wednesday that “at this point, we are running out of time” for negotiations with the Canadians.

The impending failure to reach an agreement among the three countries by Sept. 30 is creating a new round of uncertainty for companies whose supply chains and businesses depend on access to all three markets and for lawmakers, who must determine whether they can allow the United States to go it alone with Mexico.

Mexico and the United States want to sign a final deal before the new Mexican government takes over on Dec. 1, and the final text of trade agreements must be released 60 days before they are signed by the president, under United States law, fueling the deadline.

Mr. Trump would not commit to pulling out of Nafta but said he was willing to go it alone with Mexico for now.

“We’re very well along the way with Mexico, the relationship’s very good,” Mr. Trump said. “We’ll see what happens with Canada. They’re charging us 300 percent tariffs on dairy. We can’t allow that to happen.”

Specifically, The Washington Post reports that the President is considering raising tariffs on Canadian-made automobiles:

President Trump said Wednesday he was planning to impose severe economic penalties against Canada if it does not agree to major changes in its trade policies.

Speaking at a news conference in New York, Trump also said he was planning to effectively terminate the North American Free Trade Agreement and impose steep tariffs on all automotive imports from Canada to the United States.

Trump’s comments came as his relationship with Canadian Prime Minister Justin Trudeau appeared to hit a new low. The White House wanted Trudeau to agree to changes to NAFTA by this weekend, but talks stalled several days ago over a number of issues.

Canada is the United States’s largest trading partner, but Trump has accused Canadians of ripping off American workers for years, largely because of complaints he has heard from dairy farmers in Wisconsin and New York.

As the relationship between Trump and Trudeau continues to worsen, it is unclear what that could mean for either economy, or for the trade relationship that connects thousands of companies in both countries.

Meanwhile, Trump’s claim that he deliberately snubbed Trudeau at the United Nations received pushback after the President’s press conference was over when it was revealed that there was no meeting scheduled between the two men:

President Donald Trump claimed he snubbed a meeting request from Canadian Prime Minister Justin Trudeau at the United Nations this week. “I’ve told him forget about it,” Trump remarked Wednesday during a news conference on the sidelines of the U.N. General Assembly.

Canada, however, was quick to cry foul. No such meeting was ever requested, a Trudeau spokesman told CNN, adding: “We do not have any comment beyond that.”

The back and forth about the supposed meeting comes amid the U.S. and Canada’s acrimonious renegotiation of the North American Free Trade Agreement, or NAFTA, and follows months of souring relations between the two North American neighbors.

Speaking at the news conference, Trump alleged he refused a “one-on-one meeting” with Trudeau because of Canada’s high dairy tariffs and poor “negotiating style.” He also took a shot at Canada’s “representative” in the NAFTA negotiations, an apparent reference to Foreign Affairs Minister Chrystia Freeland, who has been leading Canada’s negotiations with the U.S.

Trudeau’s “tariffs are too high, and he doesn’t seem to want to move, and I’ve told him forget about it, and frankly, we’re thinking about just taxing cars coming in from Canada,” Trump said. “That’s the mother lode. That’s the big one.”

He added: “We’re very unhappy with the negotiations and the negotiating style of Canada. We don’t like their representative very much.”

Trudeau and Trump were captured on camera briefly shaking hands on Tuesday during a luncheon for world leaders.

Trudeau, who was standing, tapped Trump’s shoulder to greet him. The U.S. president stayed seated as he extended his hand for a cursory handshake. Trump’s decision to stay seated during the exchange has been described as a snub and as showing a lack of diplomatic etiquette.

On a logical level, the President’s animosity toward Canada in general and Prime Minister Trudeau specifically are utterly bizarre and not based in common sense or evidence. As has been pointed out numerous times, Canada is one of America’s largest trading partner and we share the longest peaceful border of any two nations on the planet. In 2017, our total goods and services trade with Canada totaled roughly $673.1 billion dollars, including exports totaling $ 340.7 billion and imports totaling $332.3 billion, leaving the United States with a trade surplus with Canada of $8.4 billion, which is consistent with the trade surplus we’ve run for many years. (Source) This compares favorably to our trade relationship with China, Mexico, Japan, South Korea, Taiwan, Australia, and the United Kingdom. When it comes to trade and business, the United States and Canada not only have a strong trading relationship but what effectively operates as a single market that benefits businesses and consumers on both sides of the American-Canadian border.

Additionally, Canada is one of America’s closest and longest-standing allies. Canadians have fought alongside Americans in numerous conflicts including World War Two, the Persian Gulf War, and the War in Afghanistan. Canada and the United States also share an air defense command in NORAD that is one of the longest-standing military alliances in the world. Finally, it was, of course, Canada that played host to hundreds of American tourists who were prevented from landing in the United States on September 11th, 2001. Canadian citizens are perhaps our biggest source of foreign tourism and travel, and Americans cross the border into Canada on such a regular basis that crossing the border back and forth from Canada to the United States and vice versa. Despite all of this, this President has done everything he can to ruin that relationship.

In May, for example, the President revoked the exemption from the steel and aluminum tariffs that had been announced back in March that applied to American allies in Europe as well as Canada and Mexico. In doing so, Trump claimed that he was taking this action for “national security” reasons, an utterly silly notion that doesn’t even come close to meeting the test of credulity. Needless to say, this didn’t go over very well with our allies in Europe and elsewhere. Canada’s Foreign Minister called the new tariffs “absurd,” for example, and European Union officials announced retaliatory tariffs against American goods. Things got even more bizarre in this regard as Trump exchanged harsh words with Canadian Prime Minister Justin Trudeau prior to the G-7 Summit. Once he was at the summit, Trump essentially did everything he could to alienate America’s closest allies, thereby seemingly achieving a goal that Russia and, before it, the Soviet Union had only dreamed of, driving a wedge between the United States and its allies. After the Singapore Photo Op Summit, Trump continued his tirade against Trudeau, while polling revealed that Canadian public opinion about the United States was suffering as a result of American actions and the President’s rhetoric.

The President’s attacks on Canadian auto exports are particularly absurd, though. Nearly all, if not all, of the automobiles assembled in Canada, are from American car companies, many of whom have factories established on the other side of the border for economic and other reasons. Additionally, nearly all of those Canadian factories rely on parts that are produced in the United States, and in many cases, the car factories in the United States rely on parts that are produced in Canada. Attacking Canadian car exports is only going to harm American car companies, American car parts suppliers, and American consumers.

So much for the idea that that  “trade wars are good and easy to win.”