Toni Fritsch, one of the original soccer-style kickers to play in the NFL, died today of heart failure in his native Vienna. He was only 60.

Toni Fritsch, who went from Austrian soccer player to place-kicker for the Dallas Cowboys, died Tuesday. He was 60. Peter Klingelmueller, a spokesman for Rapid Vienna, the soccer club on which Fritsch played for 14 years, confirmed Fritsch’s death. The Austria Press Agency reported that Fritsch collapsed and died of heart failure in Vienna after eating at a restaurant.

Fritsch played in nine matches for the Austrian national soccer team and, in 1965, scored two goals for Austria as it defeated England 3-2 in London. Six years later, soccer-style kickers were becoming popular in the NFL and the Cowboys sent scouts to Europe in search of strong-legged soccer players who could be taught to boot footballs. “The first place we went was Vienna, and the first player we tried out was Toni Fritsch,” then-Cowboys personnel director Gil Brandt recalled Tuesday in Dallas. “He had a hard time speaking English at first, but he did master it.”

Brandt recalled that Fritsch kicked the winning field goal in his NFL debut. It was a 26-yarder with 1:53 left that gave Dallas a 16-13 victory over the Cardinals in St. Louis. “It was one of the funniest things I’ve ever seen,” Brandt said. “A linebacker for the Cardinals was hollering, `Choke, Fritsch, choke!’ and Dave Edwards, our upback on the protection team, said, ‘He can’t understand English.’ ”

Fritsch, a gregarious guy who was popular with teammates, shared kicking duties in Dallas in 1971, then had the job pretty much to himself for the 1972, ’73 and ’75 seasons. He led the NFC with 22 field goals in 1975. The Cowboys beat Miami in the Super Bowl after the 1971 season and lost the title game to Pittsburgh after the ’75 season. After kicking for San Diego for part of the 1976 season, Fritsch settled in with the Houston Oilers from 1977-81 and was part of their “Luv Ya Blue” heyday under Earl Campbell and coach Bum Phillips. He finished his NFL career kicking for Phillips on the New Orleans Saints in 1982.

Fritsch still holds an NFL record by having kicked a field goal in 13 straight playoff games. New England’s Adam Vinatieri has an ongoing streak of 12 games.

Fritsch was kicking for the Oilers, who I also followed at the time, when I began following the NFL in earnest after moving to Texas from Germany in 1979. He was one of a string of excellent placekickers the Cowboys have had over the years. 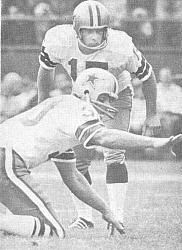