Too Hot For Sesame Street ? 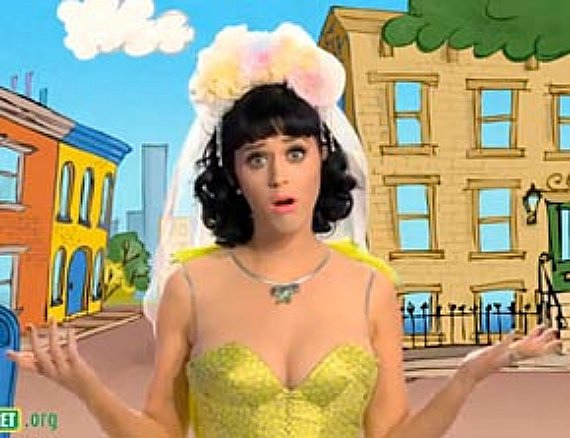 A planned appearance by Katy Perry on Sesame Street has been canceled after the video for the appearance turned out to be too risque for some eyes:

[A] Sesame Street spokesperson issued a statement to UsMagazine.com early Thursday morning, deciding to side with the angry viewers:

“Sesame Street has a long history of working with celebrities across all genres, including athletes, actors, musicians and artists. Sesame Street has always been written on two levels, for the child and adult. We use parodies and celebrity segments to interest adults in the show because we know that a child learns best when co-viewing with a parent or care-giver. We also value our viewer’s opinions and particularly those of parents. In light of the feedback we’ve received on the Katy Perry music video which was released on You Tube only, we have decided we will not air the segment on the television broadcast of Sesame Street, which is aimed at preschoolers. Katy Perry fans will still be able to view the video on You Tube.”

And, indeed, here is the video:

But I’ve got to wonder if the adults watching this are forgetting what they see, and what the kids watching the show will get out of it, are two entirely different things.

This one strikes me as just a little ridiculous. The other thought that strikes me is that, had they run the video, Sesame Street would’ve had it’s highest male demographics in decades.