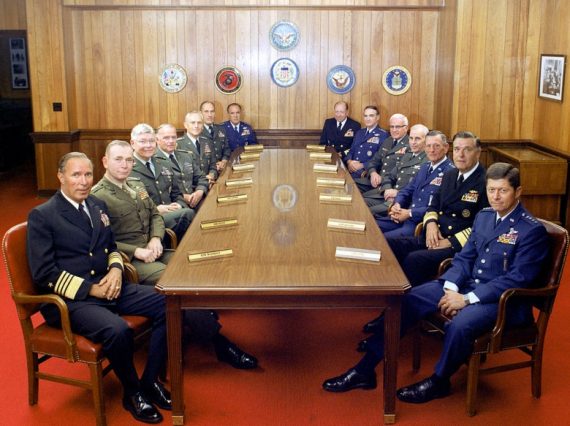 My latest for The National Interest, “Getting Rid of Generals Won’t Save Much Money, But It’s Still a Good Idea,” has posted.  The title gives you a very good idea where I’m going. Here’s an excerpt to give a bit more flavor:

Take the current Pacific Command organizational chart as an example. The four-star commander has a three-star deputy and a two-star chief of staff. There are nine J-code staff directors, who range from two-stars to colonel/captain rank, each of whom have a subordinate staff. There are three subordinate unified commands (Japan, Korea, and special operations) commanded by three-, four-, and two-star generals, respectively. Then there are four subordinate component commands, representing the services. The Army and Navy each have four-stars, while the Air Force and Marines have three-stars. There’s also a separate standing task force commanded by a rear admiral and a handful of special headquarters. And that’s just the top level of the organization.

Not only is that a lot of overlapping staff, with several four-stars reporting to one another (and in some cases to yet another) but it’s not even a warfighting headquarters. In the old days, a General Norman Schwarzkopf would run the war as the CENTCOM commander. Nowadays, we form a joint or combined task force, typically assigning either the deputy GCC or one of the component commanders as the task force commander and then designating a joint/combined ground force, maritime force, and air component commander. Why not just operate that way all the time rather than creating a new organization on the fly when it’s time to actually fight the force?

elatedly, the Senate plan would cut the number of four-star officers from the current 41 to 27, limiting the billets to the most obvious posts (“Chairman, Vice Chairman, and other members of the Joint Chiefs of Staff, including the head of the National Guard Bureau; the Combatant Commanders”) plus “the Commander of U.S. Forces- Korea; one additional joint billet for which the President could nominate for advice and consent by the Senate an officer for a four-star joint command (such as the current mission in Afghanistan); and three additional four-star billets each for the Army, Navy, and Air Force to be filled as they choose.”

Indeed, from a pure unity of command perspective, the three “filled as they choose” slots for the services seem superfluous. It makes sense for the Joint Chiefs to be four-star officers. Ditto the combatant commanders, whether geographical or functional. They’re the core uniformed leadership of the armed forces. Likewise, it makes sense for commanders of especially large long-term task forces, such as the commanders in Korea and Afghanistan, to hold four-star rank, since they have multiple three-star subordinates.

It’s not obvious, however, why the vice-chiefs of the services need to also be four-star officers. Or the service-level component commanders at each of the combatant commands. Let alone the service-level Materiel Commands. The Director, Naval Nuclear Propulsion Program?