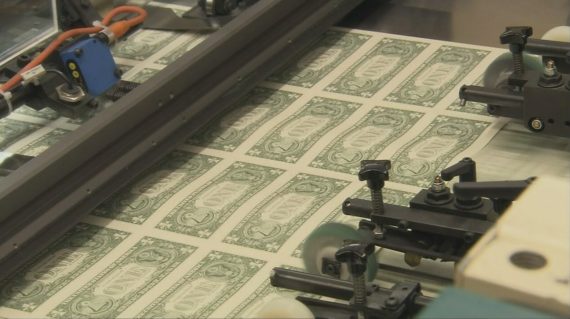 The printing presses at the Bureau of Engraving and Printing aren’t running as fast as they used to, but it isn’t because the government is spending less:

The number of dollar bills rolling off the great government presses here and in Fort Worth fell to a modern low last year. Production of $5 bills also dropped to the lowest level in 30 years. And for the first time in that period, the Treasury Department did not print any $10 bills.

The meaning seems clear. The future is here. Cash is in decline.

You can’t use it for online purchases, nor on many airplanes to buy snacks or duty-free goods. Last year, 36 percent of taxi fares in New York were paid with plastic. At Commerce, a restaurant in the West Village in Manhattan, the bar menus read, “Credit cards only. No cash please. Thank you.”

“This morning I bought a gallon of milk for $2.50 at a Mobil station, and I paid with my credit card,” said Tony Zazula, co-owner of Commerce restaurant, who spoke with a reporter while traveling in upstate New York. “I do carry a little cash, but only for gratuities.”

It is easy to look down the slope of this trend and predict the end of paper currency. Easy, but probably wrong. Most Americans prefer to use cash at least some of the time, and even those who do not, like Mr. Zazula, grudgingly concede they cannot live without it.

Currency remains the best available technology for paying baby sitters and tipping bellhops. Many small businesses — estimates range from one-third to half — won’t accept plastic. And criminals prefer cash. Whitey Bulger, the Boston gangster who lived in Santa Monica for 15 years, paid his rent in cash, and stashed thousands of dollars in his apartment walls.

Indeed, cash remains so pervasive, and the pace of change so slow, that Ron Shevlin, an analyst with the Boston research firm Aite Group, recently calculated that Americans would still be using paper currency in 200 years.

“Cash works for us,” Mr. Shevlin said.  “The downward trend is clear, but change advocates always overestimate how quickly these things will happen.”

Cash also provides a degree of anonymity and privacy that paying by credit card, debit card, or check never will. If I buy something with cash, the government won’t know who bought it, where they bought it, or what it was that was purchased. Yes, cash makes criminal transcations easier, which is one of the reasons that laws have been written to regulate and monitor large cash transactions. However, there are also perfectly legitimiate reasons why someone would want their buying history to be secret, which is why any move toward a government-mandated  “cashless” society should be viewed with suspicion.

Personally, I’m one of those people who uses electronic money more than cash these days, mostly because it’s just more convenient than carrying around large amount of bills all the time. Nonetheless, there are some transactions for which cash will always be a more efficient means of payment so, any evolution to a “cashless” society anytime soon seems a long way off to say the least. 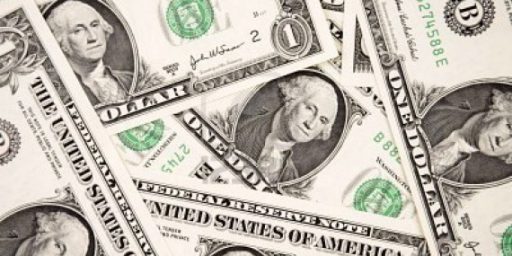 What Happens When A Business Won’t Accept Cash For Payment?