Trump, Hamilton, and the Presidency

If one believes the electoral college is awesome, one cannot make an argument from the position of "the wisdom of the Founders" nor from a viewpoint based on original intent. 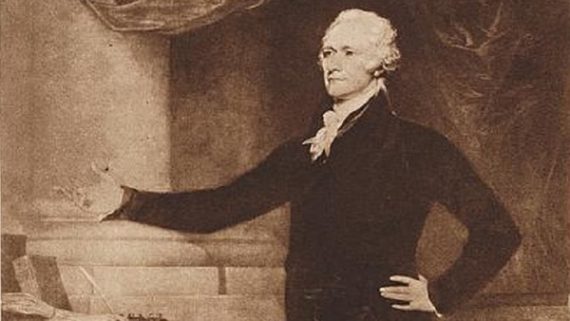 No, I am not referring to the current brouhaha regarding Vice President-elect Pence’s visit to Hamilton: An American Musical.

Rather, I am thinking about the actual Alexander Hamilton and his writings on the electoral college, specifically Federalist 68:

The process of election affords a moral certainty, that the office of President will never fall to the lot of any man who is not in an eminent degree endowed with the requisite qualifications. Talents for low intrigue, and the little arts of popularity, may alone suffice to elevate a man to the first honors in a single State; but it will require other talents, and a different kind of merit, to establish him in the esteem and confidence of the whole Union, or of so considerable a portion of it as would be necessary to make him a successful candidate for the distinguished office of President of the United States. It will not be too strong to say, that there will be a constant probability of seeing the station filled by characters pre-eminent for ability and virtue.

First, it is rather difficult, from a factual and dispassionate point of view, to claim that the winner of the electoral vote and President-elect of the United States, Donald J. Trump, is in some “eminent degree endowed with the requisite qualifications” to hold that office (save that he is a natural born American over 35 years of age).   Nor is he, “pre-eminent for ability and virtue.” This is especially true if we consider the that Framers were highly influenced by Greek and Roman (as influenced by Greek) philosophical claims about virtue.  They would not have found Trump’s clear avarice to be virtuous in the least (go look at what Plato said about perusing wealth, for example).  Nor would they find a life bereft of public service until the age of 70 to be admirable (look, for example, at what John Adams and many other Founders wrote about public service).

In terms of fulfilling the intent of the Framers, it is very difficult to argue that President Trump would fit their vision of what the EC would produce.

We have to remember, that the original design of the electoral college assumed that the states would select delegates (i.e., electors) who would come together and deliberate over who should be president (back to Hamilton):

the immediate election should be made by men most capable of analyzing the qualities adapted to the station, and acting under circumstances favorable to deliberation, and to a judicious combination of all the reasons and inducements which were proper to govern their choice. A small number of persons, selected by their fellow-citizens from the general mass, will be most likely to possess the information and discernment requisite to such complicated investigations.

Note that this was an elite process:  men with knowledge and wisdom brought together to discuss, debate, and weigh options before making a selection for their votes.  This is the direct opposite of using the institution to select a populists who is on track to lose the popular vote by somewhere in the vicinity of 1.5 million votes.  Indeed, when one thinks about what the institution was designed to do and then compare that to what the 2016 election has created, it is pretty stunning.  Now, understand, that doesn’t necessarily make the outcome wrong from an institutional process point of view.  But it clearly demonstrates the folly of asserting the EC functioned as designed.  Arguments about red and blue states, swing states, and even the population of states miss utterly the arguments made for the EC in the Federalist Papers.  At a minimum, the electoral college evolved away from its original design a long, long time ago (really, starting with the election of Adams and certainly by the election of Jefferson).

The Framers of the US Constitution and the proponents of the electoral college would almost certainly be appalled by President Trump for these very reasons.  Further, they would have to admit that the institution they designed did not work as they intended.  So, this means that even if one believes the electoral college is awesome, one cannot make an argument from the position of “the wisdom of the Founders” nor from a viewpoint based on original intent.  Such positions are utterly unsupportable.

In conclusion let me be clear about three things.  First, the electoral college does not work as designed.  This is clear and not disputable if one looks at the writings of its designers.  Second, this means that any appeals to design or “original intent” are flawed (and, indeed, are wrong).  Third, this does not mean, however, that the electoral college is indefensible, it just means that any defense of it requires arguments that have nothing to do with the Framers of the Constitution.  As such, this is a plea, at a minimum, that one understand what one is claiming.  Further, it is to point out that not only can one not claim that the results of 2016 are what the Framers intended, Federalist 68 makes a pretty good case that 2016 is the opposite of what they intended.