Donald Trump is undermining his own Secretary of State's efforts on North Korea, and he doesn't seem to care. 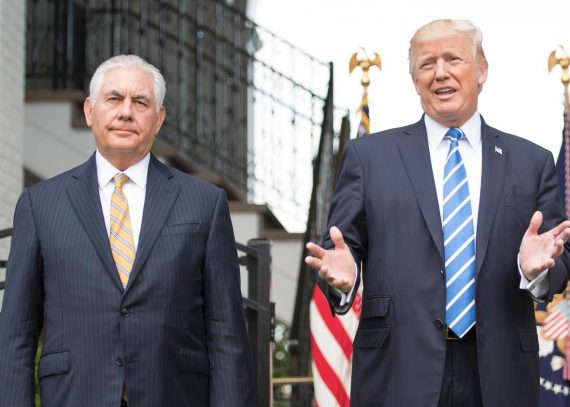 Over the weekend, President Trump used his Twitter account to undermine his own Secretary of State’s efforts to find some kind of diplomatic solution to the continuing crisis involving North Korea’s nuclear weapons program and the dangers its poses to the United States, America’s allies in the region, and a good part of the rest of the world:

WASHINGTON — President Trump undercut his own secretary of state on Sunday, calling his effort to open lines of communication with North Korea a waste of time, and seeming to rule out a diplomatic resolution to the nuclear-edged confrontation with Pyongyang.

A day after Secretary of State Rex W. Tillerson said he was reaching out to Pyongyang in hopes of starting a new dialogue, Mr. Trump belittled the idea and left the impression that he was focused mainly on military options. Mr. Trump was privately described by advisers as furious at Mr. Tillerson for contradicting the president’s public position that now is not the time for talks.

“I told Rex Tillerson, our wonderful Secretary of State, that he is wasting his time trying to negotiate with Little Rocket Man,” Mr. Trump wrote on Twitter, using the derogatory nickname he has assigned to Kim Jong-un, the North Korean leader. “Save your energy Rex,” he added, “we’ll do what has to be done!”

While some analysts wondered if the president was intentionally playing bad cop to the secretary’s good cop, veteran diplomats said they could not remember a time when a president undermined his secretary of state so brazenly in the midst of a tense situation, and the episode raised fresh questions about how long Mr. Tillerson would remain in his job.

A former chief executive of Exxon Mobil with no prior government experience, Mr. Tillerson has been deeply frustrated and has told associates that he tries to ignore the president’s Twitter blasts. But these would be hard to disregard as Mr. Tillerson returned from China, where he was trying to enlist more support from North Korea’s primary trading partner and political patron.

“It may be intended as a good-cop, bad-cop strategy, but the tweet is so over the top that it undercuts Tillerson,” said Sue Mi Terry, a former Korea analyst at the Central Intelligence Agency and National Security Council. “It’s hard to imagine any other president speaking in this manner.”

Christopher R. Hill, who under President George W. Bush was the last American negotiator to reach a significant agreement with North Korea, said, “Clearly, it is part of his management style, which seems to be to undermine his people at every turn.” While Mr. Hill took issue with the way Mr. Tillerson handled his disclosure in Beijing on Saturday, “Trump’s tweet undermines Tillerson’s visit, leaving his interlocutors wondering why they are wasting the time to speak with him.”

But Michael Green, who was Mr. Bush’s chief Asia adviser, said the time was not ripe yet for talks. “The president is right on this one in the sense that Pyongyang is clear it will not put nuclear weapons on the negotiating table, nor will the current level of sanctions likely convince them to do so, though an effective sanctions regime might in time,” he said.

Indeed, several hours after his initial tweets, Mr. Trump seemed to preclude the possibility that the time might ever be ripe, without laying out his own preferred strategy. “Being nice to Rocket Man hasn’t worked in 25 years, why would it work now?” he wrote, evidently referring not just to Mr. Kim, who took over six years ago, but also his father, Kim Jong-il, and grandfather, Kim Il-sung, the nation’s founder. “Clinton failed, Bush failed, and Obama failed. I won’t fail.”

Here are the tweets in question:

I told Rex Tillerson, our wonderful Secretary of State, that he is wasting his time trying to negotiate with Little Rocket Man…

…Save your energy Rex, we’ll do what has to be done!

Being nice to Rocket Man hasn’t worked in 25 years, why would it work now? Clinton failed, Bush failed, and Obama failed. I won’t fail.

In any other Administration, the idea that what we’re seeing here is some elaborate cat and mouse game in which the President is coming across in public as some kind of unhinged lunatic who thinks that hurling insults at an unpredictable leader of a hostile regime who continues to have rather obvious concerns about domestic and foreign plotters while his Secretary of State and other try to pursue a more diplomatic track might be believable. With this President, though, there’s pretty much no reason to believe that this is the case. Instead, as we’ve seen so many times in the past eight months, it’s more likely that he’s spouting off what he believes on Twitter without any real concern about whether or not he’s undermining his staff, his Cabinet members, or his own Administration’s policies in doing so. As he did with several of his Republican opponents during the campaign, who he often referred with nicknames like “Little Marco,” “Lyin’ Ted,” or “Low Energy Jeb,” and during the General Election when her referred to his opponent as “Crooked Hillary,” Trump appears to truly believe that referring to the leader of an adversary with a nickname like “Rocket Man” or “Little Rocket Man” actually accomplishes something. He appears to be so convinced of this that he even used the nickname in his speech to the United Nations General Assembly last month, a forum that hardly seems appropriate for the kind of schoolyard tit-for-tat that Trump typically confines to his Twitter account or to campaign speeches.

Instead of being evidence of some sophisticated “good cop/bad cop” game that Trump and his advisers may be playing, it seems rather clear that this is yet another example of tweeting without thinking, or thinking that he knows better than his adviser how to handle a situation that Trump himself has been stumping American diplomats and Presidents for the past quarter-century. In this case, Trump clearly believes that threatening to annihilate North Korea in numerous public statements, an act which, if unprovoked, would be a violation of several treaties to which the United States is a signatory as well as constituting genocide under international law. These are things he obviously doesn’t care about as much as he cares about saying things in public that get a “Hell Yeah!” response from his sycophantic supporter. A President who is primarily motivated by his desire to sound like a tough guy is precisely the wrong person to be in the Oval Office. Unfortunately, that’s who were stuck with until at least January 20, 2021.