My contribution to a continuing debate.

Last August, I published an essay in Defense One titled, “Who Decides Who Is a ‘Domestic Enemy’?” It was a response to a call from two distinguished retired Army officers for the Chairman of the Joint Chiefs to remove President Trump from office by force in the event he refused to leave the White House after losing an election. The next day, I received an inquiry from Mike Guillot, the outgoing editor of Strategic Studies Quarterly, as to whether I would be interested in contributing to a special issue on civil-military relations edited by Jim Golby. While that sounded like a lot of work, the opportunity to work with Golby, a rising superstar in the field, was too good to pass up, so I accepted.

I was right. It was a lot of work! It took weeks just to figure out exactly what I wanted to write about and several more weeks to cobble together a draft. My research question was whether President Trump’s filling his cabinet with so many retired generals did further damage to civil-military relations, as so many scholars in the field (myself included) predicted it would. After doing the work, I concluded that, while there were indeed a remarkable number of crises on the civil-military relations front, they were a function of Trump, not the generals.

The first draft was rough and I got a lot of helpful pushback from Guillot and, especially, Golby that forced me to bolster my arguments. And because of the long window between my submissions and going to press, there were multiple new developments—most notably the January 6 attack on the Capitol and President Biden’s nomination of Lloyd Austin as Secretary of Defense—that I needed to incorporate into the revisions.

The issue went live last night and my contribution, “Trump’s Generals: A Natural Experiment in Civil-Military Relations,” is available in PDF format at the link. The abstract:

President Donald Trump’s filling of numerous top policy positions with active and retired officers he called “my generals” generated fears of militarization of foreign policy, loss of civilian control of the military, and politicization of the military—yet also hope that they might restrain his worst impulses. Because the generals were all gone by the halfway mark of his administration, we have a natural experiment that allows us to compare a Trump presidency with and without retired generals serving as “adults in the room.” None of the dire predictions turned out to be quite true. While Trump repeatedly flirted with civil-military crises, they were not significantly amplified or deterred by the presence of retired generals in key roles. Further, the pattern continued in the second half of the administration when “true” civilians filled these billets. Whether longer-term damage was done, however, remains unresolved.

Unbeknown to me until Golby previewed the issue on Twitter a couple of weeks back, the other contributors to the issue are rock stars in the field. Former Chairman of the Joint Chiefs Martin E. Dempsey leads off the issue and he’s followed by a murderer’s row of civil-military relations scholars: Peter Feaver and Dick Kohn, Kori Schake, Pauline Shanks Kaurin, Risa Brooks, and Mac Owens. And then me. I can now appreciate how Christian Laettner felt when he was on the 1992 Olympic Dream Team. 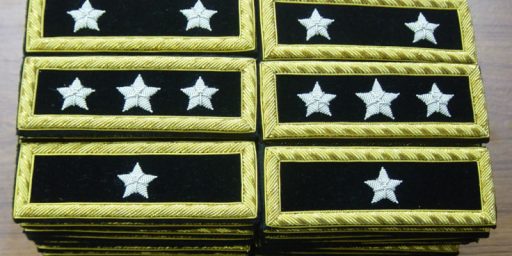 Another General In Trump’s Cabinet