TheTransportation Security Administration is expanding its purview to train stations and sporting events. 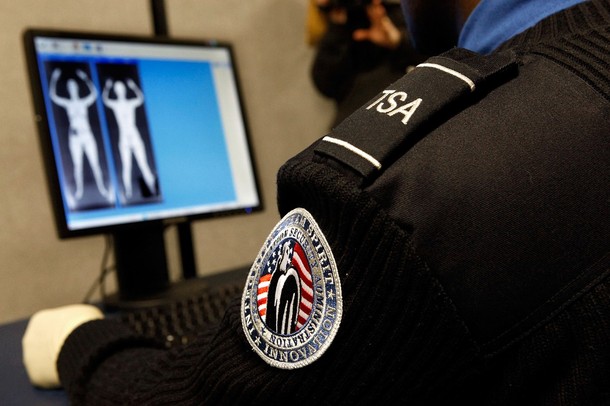 Having endeared themselves to the traveling public, the Transportation Security Administration is expanding its purview to train stations and sporting events.

As hundreds of commuters emerged from Amtrak and commuter trains at Union Station on a recent morning, an armed squad of men and women dressed in bulletproof vests made their way through the crowds.

The squad was not with the Washington police department or Amtrak’s police force, but was one of the Transportation Security Administration’s Visible Intermodal Prevention and Response squads — VIPR teams for short — assigned to perform random security sweeps to prevent terrorist attacks at transportation hubs across the United States.

“The T.S.A., huh,” said Donald Neubauer of Greenville, Ohio, as he walked past the squad. “I thought they were just at the airports.”

With little fanfare, the agency best known for airport screenings has vastly expanded its reach to sporting events, music festivals, rodeos, highway weigh stations and train terminals. Not everyone is happy.

T.S.A. and local law enforcement officials say the teams are a critical component of the nation’s counterterrorism efforts, but some members of Congress, auditors at the Department of Homeland Security and civil liberties groups are sounding alarms. The teams are also raising hackles among passengers who call them unnecessary and intrusive.

“Our mandate is to provide security and counterterrorism operations for all high-risk transportation targets, not just airports and aviation,” said John S. Pistole, the administrator of the agency. “The VIPR teams are a big part of that.”

Some in Congress, however, say the T.S.A. has not demonstrated that the teams are effective. Auditors at the Department of Homeland Security are asking questions about whether the teams are properly trained and deployed based on actual security threats.

Civil liberties groups say that the VIPR teams have little to do with the agency’s original mission to provide security screenings at airports and that in some cases their actions amount to warrantless searches in violation of constitutional protections.

“The problem with T.S.A. stopping and searching people in public places outside the airport is that there are no real legal standards, or probable cause,” said Khaliah Barnes, administrative law counsel at the Electronic Privacy Information Center in Washington. “It’s something that is easily abused because the reason that they are conducting the stops is shrouded in secrecy.”

T.S.A. officials respond that the random searches are “special needs” or “administrative searches” that are exempt from probable cause because they further the government’s need to prevent terrorist attacks.

I’ve always contended TSA searches in airports were rather clearly unreasonable and therefore in violation of the 4th Amendment. But, if they’re not, I see no obvious reason why searching people without reasonable suspicion at train stations and sporting events is any less unreasonable. Sure, we had the 9/11 attacks, but any large public venue is a potential terrorist target; indeed, the presence of airport security would seem to make other venues more attractive.

Of course, as Matt Yglesias reminds us, the general public is perfectly pleased with the job TSA is doing, with a majority giving them Good (41%) or Excellent (13%) ratings and only 12% rating them Poor. And a whopping 85% surveyed said TSA was at least somewhat effective at preventing acts of terrorism. So,while they’re the whipping boy of a lot of us, myself decidedly included, there’s unlikely to be any backlash at this expansion of their remit. 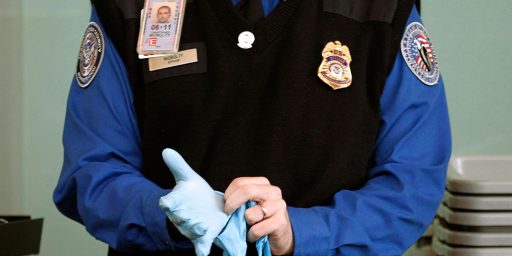