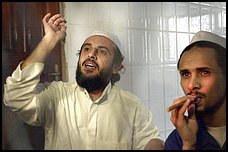 A court in Yemen sentenced two men to death and four others to prison terms today for their roles in the suicide bombing of the USS Cole in October 2000, an attack that killed 17 U.S. sailors and injured 40 more. The six — five Yemenis and a Saudi — were charged with organizing the attack on the Norfolk, Va.-based guided missile destroyer and helping the two suicide bombers to carry out the plot, which U.S. officials say was directed by Osama bin Laden. The six all belonged to bin Laden’s al Qaeda terrorist network, Yemeni authorities said. The U.S. government welcomed the verdict.

Sentenced to death were Abd al-Rahim Nashiri, a Saudi who is in U.S. custody in an undisclosed location, and Jamal Mohammed Badawi, a 35-year-old Yemeni who was accused of serving as a top al Qaeda organizer in Yemen. Nashiri, who was arrested in the United Arab Emirates in 2002 and reportedly served as the field commander for the Cole bombing, was tried in absentia in Sanaa, the Yemeni capital.

The other men convicted in the case received sentences ranging from five to 10 years. Fahd Quso, who was supposed to have filmed the attack from an apartment in the port of Aden but failed to show up on time, was sentenced to 10 years. Maamoun Msouh received an eight-year sentence for assisting Badawi and delivering money that was used in the plot. Ali Mohamed Saleh and Murad Sirouri, both former Information Ministry employees, were sentenced to five years each for forging identification papers for one of the suicide bombers.