U.S. To Scrap Some Military Equipment Rather Than Take It Out Of Afghanistan

About $7 billion in military equipment now in Afghanistan will be scrapped rather than returned to the U.S. 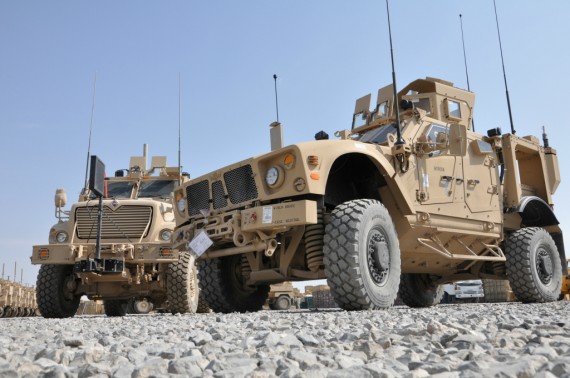 The U.S. military has decided that it will scrap some $7 billion in military equipment rather than incurring the costs and logistical nightmares associated with bringing it home from Afghanistan:

KANDAHAR AIRFIELD, Afghanistan — Facing a tight withdrawal deadline and tough terrain, the U.S. military has destroyed more than 170 million pounds worth of vehicles and other military equipment as it rushes to wind down its role in the Afghanistan war by the end of 2014.

The massive disposal effort, which U.S. military officials call unprecedented, has unfolded largely out of sight amid an ongoing debate inside the Pentagon about what to do with the heaps of equipment that won’t be returning home. Military planners have determined that they will not ship back more than $7 billion worth of equipment — about 20 percent of what the U.S. military has in Afghanistan — because it is no longer needed or would be too costly to ship back home.

That has left the Pentagon in a quandary about what to do with the items. Bequeathing a large share to the Afghan government would be challenging because of complicated rules governing equipment donations to other countries, and there is concern that Afghanistan’s fledgling forces would be unable to maintain it. Some gear may be sold or donated to allied nations, but few are likely to be able to retrieve it from the war zone.

Therefore, much of it will continue to be shredded, cut and crushed to be sold for pennies per pound on the Afghan scrap market — a process that reflects a presumptive end to an era of protracted ground wars. The destruction of tons of equipment is all but certain to raise sharp questions in Afghanistan and the United States about whether the Pentagon’s approach is fiscally responsible and whether it should find ways to leave a greater share to the Afghans.

“We’re making history doing what we’re doing here,” said Maj. Gen. Kurt J. Stein, head of the 1st Sustainment Command, who is overseeing the drawdown in Afghanistan. “This is the largest retrograde mission in history.”

The most contentious and closely watched part of the effort involves the disposal of Mine-Resistant Ambush Protected vehicles, the hulking beige personnel carriers that the Pentagon raced to build starting in 2007 to counter the threat of roadside bombs in Iraq and Afghanistan. The massive trucks, known as MRAPs, came to symbolize the bloody evolution of wars that were meant to be short conflicts but turned into quagmires.

The Pentagon has determined that it will no longer have use for about 12,300 of its 25,500 MRAPs scattered at bases worldwide, officials said. In Afghanistan, the military has labeled about 2,000 of its roughly 11,000 MRAPs “excess.” About 9,000 will be shipped to the United States and U.S. military bases in Kuwait and elsewhere, but the majority of the unwanted vehicles — which cost about $1 million each — will probably be shredded, officials said, because they are unlikely to find clients willing to come pick them up.

“MRAPs have served us well in the current war, but we will not need all that we bought for Iraq and Afghanistan in the future,” Alan Estevez, the assistant secretary of defense for logistics and materiel readiness, said in a statement. “It is cost prohibitive to retrograde and reset MRAPs that we do not need for the future.”

Scrapping military equipment rather than incurring the cost of return, or selling it off to parties who are then responsible for retrieval and tran offsportation,  isn’t a new development, of course. It’s likely a bigger concern in Afghanistan given the heavy logistical costs that we’ve incurred since the beginning of the war some twelve years ago to bring equipment and personnel into the country. Since Afghanistan is landlocked, we’ve had to rely either on airlifting equipment and personnel in or bringing it in over often treacherous mountain routes via Pakistan. Both of these options are costly, which is why transportation has been among one of the most expensive parts of our expenditures in that war. Moreover, more than once during the course of the war, we’ve been at the mercy of the Pakistanis, who felt free to close off access to the mountain routes that supply caravans would need to travel to get into Afghanistan safely. Contrasted to Iraq, where access by sea via Kuwait was the most common supply route, there  has just not been an easy way to get supplies into Afghanistan.

Now, we have to get all the stuff we brought into the country out of it and it only makes sense that the military would decide to scrap some equipment, especially things like the MRAPs that were specifically designed for fighting in Afghanistan and are unlikely to be used in the future, rather than incurring the cost of getting it to a U.S. base in Europe or the Continental U.S.