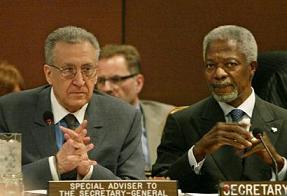 The U.N. Security Council gave resounding approval Tuesday to a resolution endorsing the transfer of sovereignty to Iraq (news – web sites)’s new government by the end of June. President Bush (news – web sites) said the measure will set the stage for democracy in Iraq and be a “catalyst for change” in the Middle East.

The unanimous 15-0 vote came after a last-minute compromise allowed France and Germany to drop their objections to the U.S.-British resolution, which underwent four revisions over weeks of tough negotiations. Diplomats on the council, which was deeply divided over the war, welcomed the Americans’ flexibility.

The compromise gives Iraqi leaders control over the activities of their own fledgling security forces and a say on “sensitive offensive operations” by the U.S.-led multinational force Ã¢€” such as the controversial siege of Fallujah. But the measure stops short of granting the Iraqis a veto over major U.S.-led military operations.

The resolution spells out the powers and the limitations of the new interim Iraqi government that will assume power on June 30. It authorizes the multinational force to remain in Iraq to help ensure security but gives the Iraqi government the right to ask the force to leave at any time.

Bush claimed victory before the vote, telling reporters at the Group of Eight summit in Sea Island, Ga., that a unanimous approval would tell the world that the council nations “are interested in working together to make sure Iraq is free, peaceful and democratic.”

“These nations understand that a free Iraq will serve as a catalyst for change in the broader Middle East, which is an important part of winning the war on terror,” Bush said.

But his administration lowered expectations of gaining other countries’ military support Ã¢€” one of the original hopes behind the resolution. Four members of the Group of Eight summit Ã¢€” France, Germany, Russia and Canada Ã¢€” have said they won’t send troops to take the burden off the 138,000 American soldiers and the 24,000 troops from coalition partners.

Nevertheless, the adoption of the resolution will likely buy time for the new Iraqi government, boosting its international stature as it struggles to win acceptance and cope with a security crisis at home.

While this is a classic example of what Charles Krauthammer long ago dubbed “psedo multi-lateralism,” the fig leaf of UN support is meaningful in some quarters. It won’t have any practical affect “on the ground” but may indeed give the interim government a bit more breathing room.