Singer Linda Ronstadt not only got booed, she got the boot after lauding filmmaker Michael Moore and his new movie “Fahrenheit 9/11” during a performance at the Aladdin hotel-casino. Before singing “Desperado” for an encore Saturday night, the 58-year-old rocker called Moore a “great American patriot” and “someone who is spreading the truth.” She also encouraged everybody to see the documentary about President Bush.

Ronstadt’s comments drew loud boos and some of the 4,500 people in attendance stormed out of the theater. People also tore down concert posters and tossed cocktails into the air. “It was a very ugly scene,” Aladdin President Bill Timmins told The Associated Press. “She praised him and all of a sudden all bedlam broke loose.”

Timmins, who is British and was watching the show, decided Ronstadt had to go Ã¢€” for good. Timmins said he didn’t allow Ronstadt back in her luxury suite and she was escorted off the property. Ronstadt’s antics “spoiled a wonderful evening for our guests and we had to do something about it,” Timmins said. Timmins said it was the first time he sent a performer packing. “As long as I’m here, she’s not going to play,” Timmins said. Ronstadt had been booked to play the Aladdin for only one show.

Aladdin President Bill Timmins ordered security guards to escort pop diva Linda Ronstadt off the property following a concert Saturday night during which she expressed support for controversial documentary filmmaker Michael Moore. Timmins, who was among the almost 5,000 fans in the audience at the Aladdin Theatre for the Performing Arts, had Ronstadt escorted to her tour bus and her belongings from her hotel room sent to her. Timmins also sent word to Ronstadt that she was no longer welcome at the property for future performances, according Aladdin spokeswoman Tyri Squyres. How much weight that carries is debatable, since the bankrupt Aladdin is in the process of being sold to a group headed by Planet Hollywood International Inc. Chairman and Chief Executive Robert Earl.

Near the close of her performance, Ronstadt dedicated the Eagles hit “Desperado” to Moore, producer of “Fahrenheit 9/11,” and the room erupted into equal parts boos and cheers. She said Moore “is someone who cares about this country deeply and is trying to help.” Ronstadt has been making the dedication at each of her engagements since she began a national tour earlier this summer, but it has never sparked such a reaction. Hundreds of angry fans streamed from the theater as Ronstadt sang. Some of them reportedly defaced posters of her in the lobby, writing comments and tossing drinks on her pictures.

Timmins told Las Vegas Sun gossip columnist Timothy McDarrah: “We live in a city where people come from all over the world to be entertained. We hired Ms. Ronstadt as an entertainer, not as a political activist. “Whether you are politically on the left or on the right is not the point. She went up in front of the stage and just let it out. This was not the correct forum for that.”

My initial reaction was Linda Ronstadt is still around?! Beyond that, Timmins is clearly right that an oldies concert is not a proper venue for such things; it’s not what the audience paid for. That said, the audience reaction–if the reports are correct–was clearly over-the-top. It’s not as if she was praising Osama bin Laden.

Of course, part of the reaction may be explained by the fact that the show itself sucked:

Other fans asked for their money back shortly after the Saturday night show got underway, when Ronstadt informed the audience that ads publicizing the concert were incorrect. The advertisements called it her “Greatest Hits Tour.” Ronstadt started the evening with her 1983 hit “What’s New?” and then set her fans straight about what they might expect during the concert. “In case you are wondering what I’m going to do,” she said, “Driving into town I saw this big billboard up there with my picture on it saying ‘The Greatest Hits Tour.’

The incident capped a generally lackluster, unenthusiastic performance by one of the top singers of the ’70s and ’80s. . . . Although she still has that powerful, distinctive voice, Ronstadt was merely going through the motions. . . . Her performance was uninspired and generally flat. She lacked stage presence, doing little more than sleepwalk from song to song. The fiasco at the end was the most exciting part of the show.

Maybe Timmins did Ronstadt a favor. All the attention is on the politics here rather than a washed up singer still trying to wring a few more nickles out of some old songs.

“My career has befuddled other people, and it’s befuddled me,” admitted Ronstadt, 58, who finds her fans are polarized by her nightly on-stage salute to “Fahrenheit 9/11” filmmaker Michael Moore.

“I’ve been dedicating a song to him Ã¢€“ I think he’s a great patriot Ã¢€“ and it splits the audience down the middle, and they duke it out,” she said.

“This is an election year, and I think we’re in desperate trouble and it’s time for people to speak up and not pipe down. It’s a real conflict for me when I go to a concert and find out somebody in the audience is a Republican or fundamental Christian. It can cloud my enjoyment. I’d rather not know.” 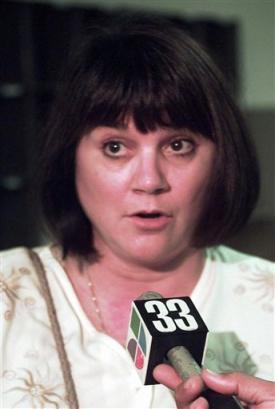