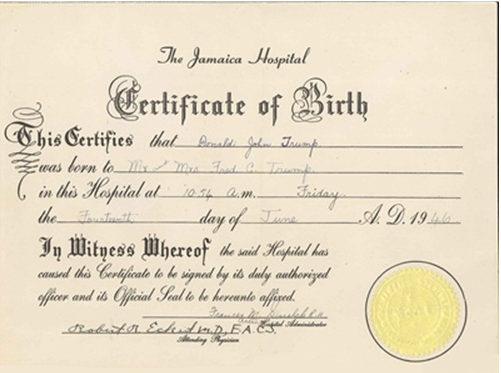 As Steven Taylor noted yesterday afternoon, Donald Trump released what he purported to be his birth certificate, his latest publicity stunt in the bizarre circus he’s been engaged in lately.

The paper that Trump released says “Jamaica Hospital” on top and lists the date and time of what he says was his birth to “Mr. and Mrs. Fred C. Trump.” The piece of paper has a seal at the bottom.

But after several New York City-based readers contacted POLITICO’s Maggie Haberman, her call to city officials revealed that an actual birth certificate, which is issued by the Department of Health, would have the agency’s seal and also a signature of the city registrar – neither of which the Trump document has. Officials said the city Health Department is the “sole issuing authority” of official birth certificates in New York, and that the document would clearly say so, and “city officials said it’s not an official document.”

It appears instead to be a hospital “certificate of birth,” meaning the piece of paper the hospital gave to his family saying he was born. Such a document typically has the signature of the hospital administrator and the attending physician.

Trump’s mother, it should be noted, was born in Scotland, which is not part of the United States. His plane is registered in the Bahamas, also a foreign country. This fact pattern — along with the wave of new questions surrounding what he claims is a birth certificate — raises serious doubts about his eligibility to serve as President of the United States.

So from the President, we have an official document from the state of Hawaii. From Donald Trump we have a piece of paper from a hospital. What’s The Donald hiding?