U.S. News: Washington Whispers has some interesting tidbits, most notably:

Nader’s 9/11 Plan
Get a load of this: Likely 2004 third-party presidential hopeful Ralph Nader thinks the 9/11 terrorist attacks wouldn’t have happened if he had been president. He claims that amid all the big decisions new presidents have to make after inauguration, he would have ordered cockpit doors to be hardened against attack. He says an old report warning about how easy it is to get in the cockpit still sticks with him. What’s more, he would have wiped out Osama bin Laden and his gang without a shot being fired. How? Bribe Osama’s friends to hand him over.

Man, if only those silly Democrats hadn’t wasted their vote going with Al Gore, we could have prevented a major tragedy.

This is also interesting, as it goes against the conventional wisdom (or, at least my longstanding conception): Advice from a seasoned Pulitzer Prize-winning political reporter to Gary Hart, Bill Clinton, and other pols with a wandering eye:

The next time you get the urge, pick a paramour who won’t blab. And, adds retired Associated Press legend Walter Mears, don’t blame the press when you get caught. Mears should know. He covered every presidential campaign from JFK to George W. Bush and reveals in his juicy memoir, Deadlines Past, that Kennedy got away with it because he kept his sex life secret, not because reporters covered up for their presidential pal. “Even if they can’t prove it, reporters trade gossip,” says Mears. “Even at last call in the bar, I didn’t hear any,” he tells us. Be assured, he adds, if reporters had the skinny on JFK and Marilyn Monroe, “it would have been nuclear.” But “his affairs were secret because he saw to it,” Mears says in the book, out in October. “Not so with Gary Hart or Bill Clinton–they got involved with talkative women.” Sure, Mears concedes, times have changed and news has become more gossipy. But, “A story is no story unless you can prove it.” 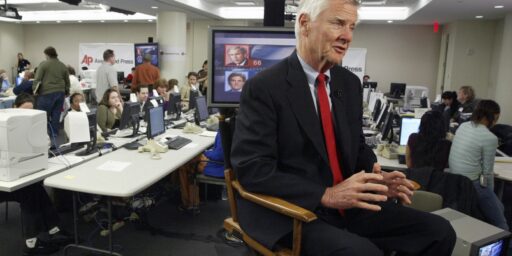