John Kelly continues to throw away the good name he earned in decades of service as a Marine to serve the agenda of President Trump. 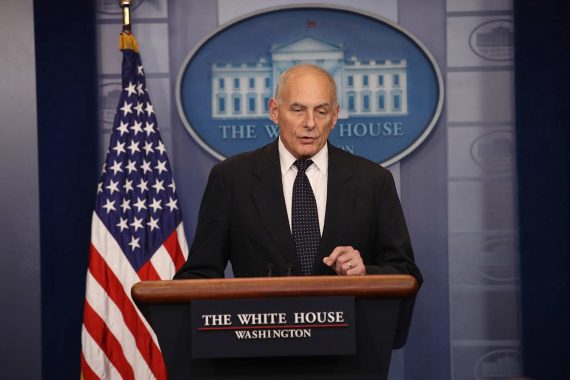 John Kelly continues to throw away the good name he earned in decades of service as a Marine to serve the agenda of President Trump.

White House chief of staff John Kelly, in a wide-ranging interview with Fox News Radio, said the California teacher who has made headlines for bashing the military in a profane classroom rant should “go to hell” – while also vowing that the classified memo that Republicans say reveals shocking government surveillance abuses will soon be made public.

“Well, I think the guy ought to go to hell,” Kelly, a retired Marine general, told host Brian Kilmeade on Wednesday in a post-State of the Union interview. “I just hope he enjoys the liberties and the lifestyle that we have fought for.”

Gregory Salcido, the El Rancho High School teacher, was recorded asking students in his government class why they would want to serve in the military overseas, calling them “the lowest of our low.” He has since been put on administrative leave.

Kelly also said the classified memo circulating in Congress that purportedly reveals government surveillance abuses will be made public soon.

“It’ll be released here pretty quick I think and the whole world can see it,” he said.

Like Brandon Friedman, an infantry veteran of the wars in Iraq and Afghanistan, I find Kelly’s attack on Salcido extremely distasteful. While I obviously disagree with Salcido’s take on the military (I’m a veteran myself, my father was a Vietnam vet who served 20 years as an enlisted soldier, and I now teach field grade officers for a living), it’s simply unseemly for the White House chief of staff, let alone one who is a retired four-star general, to attack a private citizen in this fashion. I get that he’s passionate about the military, having served over four decades in uniform and having lost his own son to war. But the Colonel Jessep routine is beyond old; it fundamentally misapprehends the nature of service.

It’s frankly even more galling to take that smug tone while in the same breath gleefully cheering the release of classified information to foment a political lie to damage our nation’s premier law enforcement agency. The Bureau released a rather damning statement on that score:

The FBI takes seriously its obligations to the FISA Court and its compliance with procedures overseen by career professionals in the Department of Justice and the FBI. We are committed to working with the appropriate oversight entities to ensure the continuing integrity of the FISA process.

With regard to the House Intelligence Committee’s memorandum, the FBI was provided a limited opportunity to review this memo the day before the committee voted to release it. As expressed during our initial review, we have grave concerns about material omissions of fact that fundamentally impact the memo’s accuracy.

On Monday, House Intelligence Committee Chairman Devin Nunes (R-Calif.) moved to release a memo written by his staff that cherry-picks facts, ignores others and smears the FBI and the Justice Department — all while potentially revealing intelligence sources and methods. He did so even though he had not read the classified documents that the memo characterizes and refused to allow the FBI to brief the committee on the risks of publication and what it has described as “material omissions of fact that fundamentally impact the memo’s accuracy.” The party-line vote to release the Republican memo but not a Democratic response was a violent break from the committee’s nonpartisan tradition and the latest troubling sign that House Republicans are willing to put the president’s political dictates ahead of the national interest.

The reason for Republicans’ abrupt departure from our nonpartisan tradition is growing alarm over special counsel Robert S. Mueller III’s investigation into Russian interference in the 2016 campaign. In a matter of months, the president’s first national security adviser and a foreign policy adviser have pleaded guilty to felony offenses, while his former campaign chairman and deputy campaign manager have also been indicted. As Mueller and his team move closer to the president and his inner circle, a sense of panic is palpable on the Hill. GOP members recognize that the probe threatens not only the president but also their majorities in Congress.

In response, they have drawn on the stratagem of many criminal defense lawyers — when the evidence against a defendant is strong, put the government on trial. The Nunes memo is designed to do just that by furthering a conspiracy theory that a cabal of senior officials within the FBI and the Justice Department were so tainted by bias against President Trump that they irredeemably poisoned the investigation. If it wasn’t clear enough that this was the goal, Nunes removed all doubt when he declared that the Justice Department and the FBI themselves were under investigation at the hearing in which the memo was ordered released.

This is simply shameful and it’s damning, indeed, that Kelly is throwing his credibility away in order to foment this outrage.