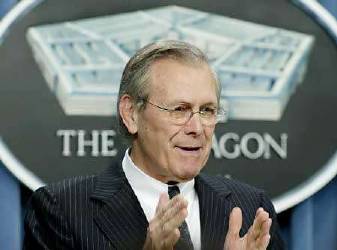 Defense Secretary Donald Rumsfeld speaks to the press at a Pentagon briefing in Washington, April 9, 2003. Rumsfeld said that Syria might be helping Saddam Hussein’s supporters to flee Iraq.
Photo by Rick Wilking/Reuters

And it appears even Syria is helping out now.

A couple of classic examples of Rumsmanship:

“Saddam Hussein is now taking his rightful place alongside Hitler, Stalin, Lenin, Ceausescu in the pantheon of failed brutal dictators, and the Iraqi people are well on their way to freedom,” he said.

“The scenes of free Iraqis celebrating in the streets, riding American tanks, tearing down the statues of Saddam Hussein in the center of Baghdad are breathtaking,” said Rumsfeld. “Watching them, one cannot help but think of the fall of the Berlin Wall and the collapse of the Iron Curtain.