In the Middle East, protesters are marching for democracy. In the Midwest, they're protesting against it. 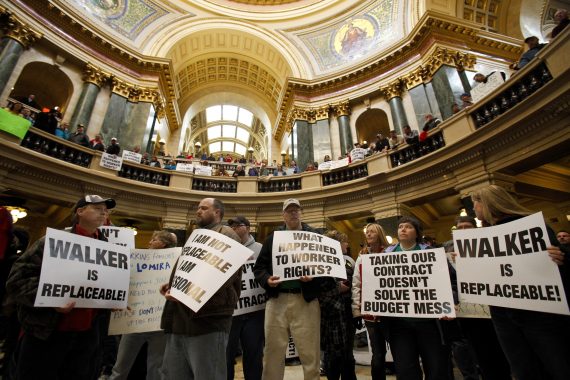 An interesting view on the Wisconsin showdown from an unlikely source, Joe Klein:

Revolutions everywhere–in the middle east, in the middle west. But there is a difference: in the middle east, the protesters are marching for democracy; in the middle west, they’re protesting against it. I mean, Isn’t it, well, a bit ironic that the protesters in Madison, blocking the state senate chamber, are chanting “Freedom, Democracy, Union” while trying to prevent a vote? Isn’t it ironic that the Democratic Senators have fled the democratic process? Isn’t it interesting that some of those who–rightly–protest the assorted Republican efforts to stymie majority rule in the U.S. Senate are celebrating the Democratic efforts to stymie the same in the Wisconsin Senate?

An election was held in Wisconsin last November. The Republicans won. In a democracy, there are consequences to elections and no one, not even the public employees unions, are exempt from that. There are no guarantees that labor contracts, including contracts governing the most basic rights of unions, can’t be renegotiated, or terminated for that matter. We hold elections to decide those basic parameters.

While I’m not particularly sympathetic to the unions here, Klein’s basic facts are wrong.

First, contracts typically can’t be summarily terminated. If they could, there’d really be no point to them! And, indeed, Wisconsin’s governor can’t simply end the contract and terminate the union. He can, presuming the Democrats show up and allow a quorum at the state legislature, modify some of the parameters.

Second, while Republican Scott Walker won the governorship and his party took over the state legislature, they decidedly did not campaign on this measure.

I do, however, largely agree with Klein’s conclusion:

Public employees unions are an interesting hybrid. Industrial unions are organized against the might and greed of ownership. Public employees unions are organized against the might and greed…of the public? Despite their questionable provenance, public unions can serve an important social justice role, guaranteeing that a great many underpaid workers–school bus drivers, janitors (outside of New York City), home health care workers–won’t be too severely underpaid. That role will be kept intact in Wisconsin. In any given negotiation, I’m rooting for the union to win the highest base rates of pay possible…and for management to win the least restrictive work rules and guidelines governing how much truly creative public employees can be paid.

But we’ve had far too many state legislatures, of both parties, that have been cowed by the political power of the unions and enacted contracts that force state and city governments to be run for the benefit of their employees, rather than for their citizens. This situation is most egregious in far too many school districts across the nation. The events in Wisconsin are a rebalancing of power that, after decades of flush times and lax negotiating, had become imbalanced. That is also something that, from time to time, happens in a democracy.

The teachers’ unions, in particular, are far too powerful. Education is the core function at the state level, consuming the largest chunk of the budget. And schoolteachers have organized to control it.  Not only do they have incredibly good terms of employment — they’re typically guaranteed jobs for life after three years of adequate performance — but they’re generally doing a lousy job educating our kids.