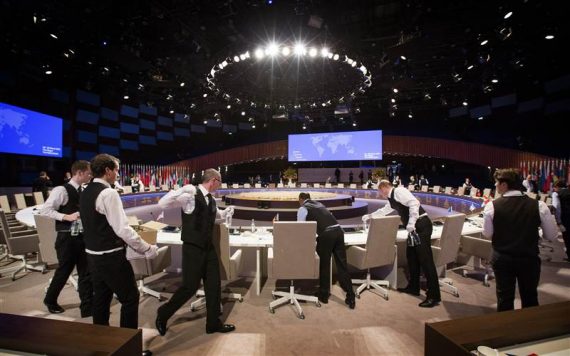 For some bizarre reason that nobody seems to be able to adequately explain, women were barred form serving dinner at the recently concluded nuclear weapons summit at The Hague:

THE HAGUE, Netherlands — It was just a little thing that the Dutch media noticed: all the people serving lunch to the world leaders at the Nuclear Security Summit on Tuesday were men. Then it was picked up by the British newspaper the Independent.

Turns out it wasn’t an accident.

According to Daphne Kerremans, the spokesperson for the Nuclear Security summit, the NSS requested two things of the company that catered the event:

Van der Linde Catering took full responsibility for the decision to go with all men and the owner tweeted an inside look at their cadre of male servers.

Owner Hans Van der Linde told NBC News that male servers “had an additional practical advantage” because unhindered by aprons, they would “find it easier to navigate the stairs while carrying plates.”

The only word I can think of to describe this is bizarre.