The winners of the Women's World Cup will get paid far less than the men that played last year, but that's not because of sexism. 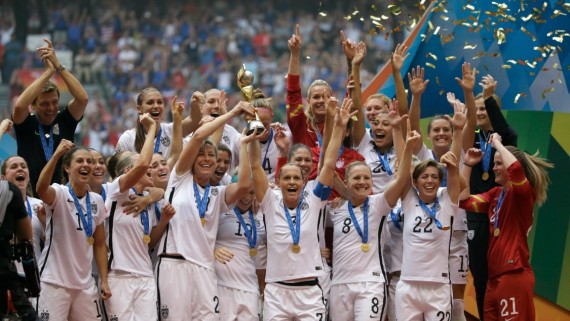 In the wake of the impressive win of the U.S. Women’s National Team on Sunday, Mary Pilon at Politico raises a point that I’ve seen repeated in other venues over the past two days, namely that the winning team of the Women’s World Cup will get paid a fraction of what the participants in last year’s 2014 FIFA World Cup were paid:

CHICAGO — This is a Great American Sports Town and here it was that I watched the Women’s World Cup, taking place 3,500 kilometers away in Vancouver, Canada. By kickoff Sunday night, hundreds of soccer fans had poured in to Lincoln Park to gather around a mammoth screen to watch the U.S. team face off against Japan.

Under a cinematic sunset, they banged drums, blew horns, waved American flags which were on hand from July 4 celebrations the night before. They hooted from the beer garden and leapt on top of picnic blankets during each one of the four American goals in the first half of the game, making for a scoreboard that felt at times more like a March Madness basketball game than professional soccer.

The Women’s World Cup has remained a feel-good event in spite of this tournament’s off-field distractions. Those included, but were not limited to: the domestic violence allegations against U.S. goalkeeper Hope Solo and how U.S. Soccer handled them; the peril (and humiliation) of competing on artificial turf; and the searing indictments from U.S. federal investigators against FIFA, soccer’s governing body.

The National Women’s Soccer League (yes, there is one and you should consider following it) has salary ranges reportedly from $6,000 to $30,000, which in some cases may put players below the poverty line in the cities in which the compete. Each National Women’s Soccer League team operates with a salary cap of around $200,000, which is about how much David Beckham makes frying an egg (let alone bending one). The MLS salary cap, by contrast, was $3.1 million in 2014. “In aggregate, first division women’s soccer players are making 98.6 percent less than professional soccer’s male cohort,” according to Fusion, making it one of the starkest gender pay divides in any workplace.

Similar posts making this argument have appeared elsewhere around the Internet at sites such as Jezebel, Salon, and Think Progress, and the basic gist of all of these articles is that this is somehow evidence of sexism and gender bias and that the pay disparity between participants in the two tournaments is inherently unfair and cannot be justified. When one actually looks at the facts, however, it seems fairly clear that there is logical explanation for the disparities between the men’s World Cup and the Women’s World Cup. The biggest difference, of course, is that the World Cup, which I will use to refer specifically to the men’s tournament next scheduled to be held in 2018, draws far more worldwide viewership and, thus, far more, sponsorship money, than the women’s does. This will likely always be the case regardless of whatever arguments one might make regarding comparisons of the quality of play between the two games, but in time it’s likely that the women’s game will gain more of a following worldwide, which will lead to better broadcasting deals and likely better revenue sharing for the teams and the players. Additionally, given that this is FIFA we’re talking about, I won’t rule the possibility that corruption plays a role in all of this. Nonetheless, the fact that the men’s tournament gets far higher worldwide viewership than the women’s tournament is something that can’t be denied, and it’s the main reason why the women’s tournament generates far less money.

This pay disparity isn’t just limited to the World Cup, of course. It can seen all across professional sports, and again the answer can be found in the fact that the team sports that feature men generally make a lot more money than the teams sports that feature women. This is true in basketball, where NBA essentially subsidizes the existence of the WNBA in no small part because it helps with the leagues marketing to female fans. It is also true in professional soccer, where Major League Soccer has been quite successful over the past decade while one women’s professional league after the other has collapsed largely due to non-interest, low attendance, and a lack of broadcasting. These differences exist largely because of the choices that fans and viewers make, and to ascribe them to sexism or discrimination as some people have is really quite absurd.

While I’m not a fan of the game, the U.S. women deserve much credit for their victory on Sunday. The fact that they’re going to get paid less than their male counterparts, though, is just a fact of life and not some grand conspiracy for the “social justice” warriors to campaign about.