Now that Saddam’s hometown has fallen, the end of the military phase of this operation should be near. 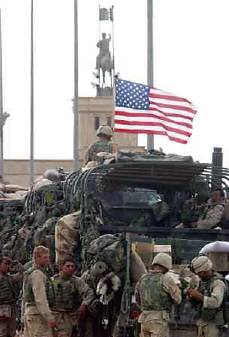 U.S. Marines stand in front of Saddam Hussein’s main palace in Tikrit on April 14, 2003. U.S. forces swooped on Saddam Hussein’s hometown in a dawn raid on Monday, seized control of the town center and began rooting out last clusters of do-or-die fighters. Photo by Nikola Solic/Reuters
FILED UNDER: Iraq War