Despite anecdotal evidence debunking global warming, 2010 was another record year for warm temperatures.

Public belief in the cause of global warming (or is that “climate change”?) took a big hit over the last year or so.  First, there were leaked reports that some key scientists were fudging the data, hiding evidence that damaged their case.  Second, we’ve had two weird winters in a row, with three feet of snow hitting Washington, DC (considered part of “the South” in living memory) and snowfall in 49 of the 50 states yesterday.

But the National Oceanic and Atmospheric Administration reports that, anecdotal evidence notwithstanding, “2010 tied with 2005 as the warmest year of the global surface temperature record, beginning in 1880.”  Furthermore, “This was the 34th consecutive year with global temperatures above the 20th century average.”  Oh, and even domestically, “For the contiguous United States alone, the 2010 average annual temperature was above normal, resulting in the 23rd warmest year on record.” 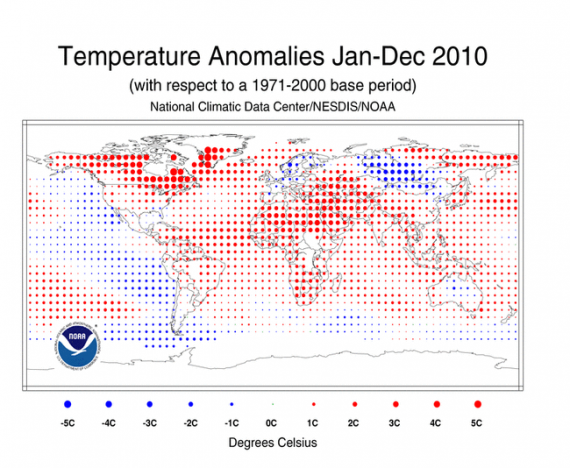 Aside from the average temperatures, 2010 was just a pretty weird year weatherwise (and otherwise, but that’s not covered by the NOLA report):

While everyone seems to recall the record snowfall, we seem to forget record hot summers for whatever reasons.  Here’s what the United States looked like last year:

So, it was actually ridiculously hot across most of the country last year, with the anomalies coming in the deepest of the Deep South — Mississippi, Alabama, Georgia, and Florida — which were much colder than usual.   But that, too, is consistent with the theory.

I don’t claim any especial expertise, even by lay standards, on the climate change issue.  My tendency in these sort of matters is to trust the scientific consensus and to pay attention to the public debate with my peripheral vision.   I’m still not sure that this isn’t mostly a function of normal variation in nature rather than something caused primarily by man’s modern lifestyle, although I’m pretty sure that we’re a contributing factor.   Nor am I sure that we can do much to reverse the trend, much less that the tradeoffs (which, to be meaningful, would hit emerging economies the hardest) are worthwhile.

But we should at least stop pretending that it’s not getting warmer.