President Obama and Chief Justice Roberts are calling for bipartisanship in the New Year. 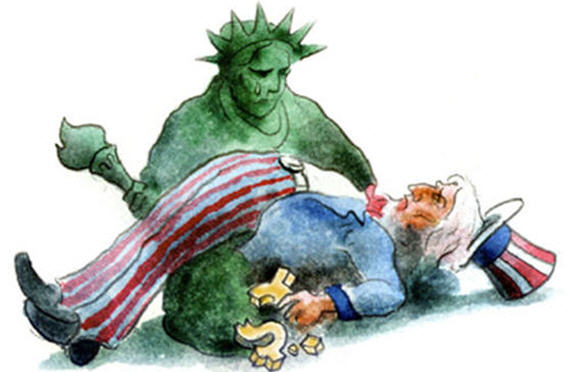 Republicans and Democrats must find a long-term solution to selecting federal judges, Chief Justice John Roberts says, while blaming both sides for the political gridlock of judicial nominations in the Senate.

“Each political party has found it easy to turn on a dime from decrying to defending the blocking of judicial nominations, depending on their changing political fortunes,” Roberts said Friday in his year-end report. “This has created acute difficulties for some judicial districts. Sitting judges in those districts have been burdened with extraordinary caseloads.”

There are more than 90 judicial vacancies in U.S. district and appellate courts. But only 60 nominees have been confirmed by the Senate for U.S. appellate and district courts in the past two years, with another 19 receiving no up-or-down vote.

Thirteen of the unconfirmed nominees received unanimous support from the Senate Judiciary Committee.

In a similar vein, President Obama is urging a Rodney King Solution:

In his weekly radio and Internet address, Obama said Saturday that lawmakers must return to Washington next week prepared to make serious decisions about how to grow the economy in the short run and stay competitive in the future.

“I’m willing to work with anyone of either party who’s got a good idea and the commitment to see it through,” Obama said. “And we should all expect you to hold us accountable for our progress or our failure to deliver.”

Alas, the system conspires against this.  Absent a crisis on the scale of the 9/11 attacks or the financial sector collapse, there’s very little incentive for cooperation.  Indeed, concessions in the name of pragmatism are the surest way to invite primary challenges and tamp down the enthusiasm of one’s party base.

The small C conservative approach to these problems is smaller government.  If the stakes were lower, the tension would decline.   If federal judges simply “followed the law” and had much less policy influence, the battles over their confirmation would be less intense.   If the federal government weren’t trying to expand its influence into more areas of our lives, there would be less to fight over.

But this is a magic pony solution.   Government is getting bigger because people are demanding it.   And, frankly, as our society becomes more complicated and our lives more intertwined — at the same time as our relations become less personal — the demand for more regulation and regulation will only grow.  And, naturally, more laws means more room for judges to make rulings on matters of equity.

Govern From the Center

A related small C conservative response is that presidents and party leaders in Congress should start with consensus positions rather than radically divergent partisan agendas.   If presidents picked moderate nominees for the courts and federal agencies to begin with, there would be less room for fighting.   Similarly, if they started with centrist positions on such matters as health care reform or tax policy, it would be harder to gin up public support for opposing the proposals.

But, again, the deck is stacked against this.   Indeed, the way to get to positions of party leadership be a True Believer or at least pander to the True Believers.   So Nancy Pelosi, John Boehner, Harry Reid, and Mitch McConnell not only have no incentive to take moderate stances but quite likely think their stances are moderate.

So, since it’s extraordinarily unlikely that the system will fix itself, that means the system needs to be fixed.

We could abandon or modify the filibuster and other nonmajoritarian devices in the Senate.  But there doesn’t seem to be much appetite for that within the Senate itself, for rather obvious reasons.   And that’s not the type of thing that public pressure will congeal around.

More radical solutions, such as moving to a parliamentary system under a Responsible Government model or moving to a unicameral legislature would require Constitutional amendment and there’s hardly a groundswell for them.

That doesn’t mean minor reforms are impossible.  For example, we should certainly radically reduce the number of positions requiring Senate confirmation.    Obviously, the Senate wouldn’t go along with ceding this territory to the White House.  But, as I’ve noted before, “Wouldn’t we be better off with an NLRB that consisted of professional civil servants, drawn from the Senior Executive Service, with rich experience but no obvious ties to organized labor or the Chamber of Commerce?   Ditto, for that matter, the Equal Opportunity Employment Commission and the Customs and Border Protection Division of DHS?  Politicizing those offices undermines their perception as fair arbiters.”

To the extent we can’t change the system, we’ll likely find ways to exploit its loopholes.

The misuse of recess appointments, a legitimate Constitutional provision designed for the exigencies of a part-time Congress we haven’t had in a century, will likely escalate.  I’m actually surprised more judicial vacancies weren’t filled this way earlier in the week.

Another solution with broader flexibility is to kick the can to “bipartisan commissions” in the way we have with military base closures and Social Security reform.   We could — and probably should — have independent commissions vetting and recommending judges, regulatory commission members, and other technical specialists.   Presidents would still have the right to pick from the slate to find candidates who most closely match his policy agenda, but they’d likely be more moderate than if ideology were the first cut rather than the last.

While I think this actually makes sense in the cases of filling certain vacancies in government, I tend not to be a fan of it in terms of legislating.   It’s extraconstitutional and amounts to passing the buck on the part of Congress — especially if there’s a BRAC-like provision requiring an up-or-down vote on the whole proposal with no amendment possible.   But it does seem the most likely path out of the current intractability.

The problem isn’t so much that we’re not getting anything done — the last Congress actually passed a surprisingly large amount of legislation, including some rather major reforms — but that mustering the required votes in the Senate tends to come at the cost of really lousy compromises which lead to really disjointed legislation.   ObamaCare was a classic case, in that we managed to pass some very popular bits (policy cancellation reform, coverage for college-age adults) without doing anything to fix the underlying problems and, indeed, likely exacerbating them.