President Obama threw down a gauntlet today in the form of a trio of Judicial nominations. 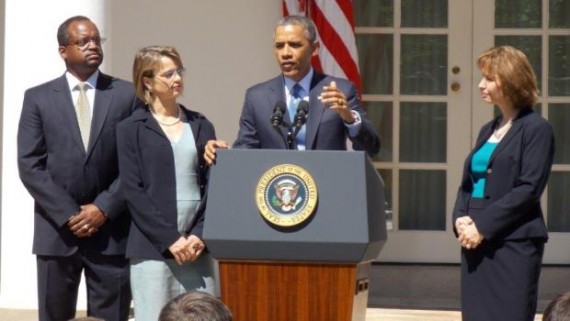 In what is clearly a direct challenge to Senate Republicans, President Obama has named three judges to fill long-standing vacancies on the Court of Appeals for the D.C. Circuit, arguably the second most important court in the country due to the number of cases involving the Federal Government that it hears on a regular basis:

WASHINGTON — President Obama set a confrontation with Senate Republicans in motion on Tuesday morning by naming a slate of judges to a top appeals court and daring his rivals to block their confirmations.

In a formal Rose Garden ceremony normally reserved for Supreme Court nominees and prominent cabinet members, Mr. Obama announced plans to nominate three people to fill the remaining vacancies on the United States Court of Appeals for the District of Columbia Circuit.

The president called on Republicans to abandon what he called partisan obstruction of his judicial nominees and approve his nominees quickly.

“This is not about principled opposition. It’s about partisan obstruction,” Mr. Obama said. “What’s happening now is unprecedented. For the good of the American people it has to stop.”

“What I’m doing today is my job,” Mr. Obama said as he announced the nominations. “What I need is the Senate to do its job.”

By nominating the judges as a group, the president is trying to restore what his allies consider to be ideological balance on a crucial court that has overturned some important parts of his first-term agenda. And he hopes to heighten public anger at Republicans for repeatedly using the threat of filibuster to block his choices for the cabinet and the courts.

The effort could culminate this summer in a legislative collision between the two parties as the Democratic and Republican leadership clash over how and whether to rewrite long-standing procedural rules that could permanently change the dynamic in the chamber.

The president named Cornelia T.L. Pillard, a law professor; Patricia Ann Millett, an appellate lawyer; and Robert L. Wilkins, a federal district judge, as his choices to fill the three open spots on the 11-member court. The three joined Mr. Obama in the Rose Garden on Tuesday morning.

Even before the formal announcement, Republicans signaled their opposition to what they called Mr. Obama’s effort to “pack” the appeals court with judges who would adhere to the ideology of the president and his Democratic allies.

“It’s hard to imagine the rationale for nominating three judges at once for this court given the many vacant emergency seats across the country, unless your goal is to pack the court to advance a certain policy agenda,” Senator Charles E. Grassley, Republican of Iowa, said on Monday night.

Mr. Grassley and other Republicans in the Senate are pushing a plan that would reduce the size of the appeals court in Washington by shifting two of its judges to circuit courts in other parts of the country and eliminating a third seat altogether. They argue that other circuits are overworked and in need of additional judges.

Democrats angrily oppose that idea, calling it part of an elaborate effort by Republicans to prevent Mr. Obama from putting his legitimate stamp on the judiciary, the way his predecessors like George W. Bush have already done.

As a preliminary matter, Senator Grassley’s assertion that President Obama is engaging in “Court packing” here is utterly absurd. These are vacancies that have existed on the Court for years now that have required the D.C. Circuit to slow down the processing of cases due to the lack of available judges, and to make wider use of Senior (Retired) Judges to fill in when there haven’t been enough available Judges to sit on the three-judge panels that are utilized in the Circuit Courts of Appeal. One of these vacancies is the seat that has been vacant since Chief Justice Roberts was elected to Chief Justice of the Untied States in 2005, meaning that the D.C. Circuit has been without that Judge for nearly eight years now. In all honesty, the President should have made appointments long ago, and that applies also to President Bush who had three years during which he could have appointed a replacement, but that’s water under the bridge at this point. Indeed, the confirmation last month of Sri Srinivasan to fill a fourth vacancy on the the D.C. Circuit was the first Judge confirmed to the D.C. Circuit since Judge Brett Kavanaugh was confirmed by the Senate in 2006. President Bush had three appointments to the D.C. Circuit confirmed over the course of his eight years in office. So far, President Obama has had only one confirmed.

More importantly, though, calling what the President is doing here “court packing” completely ignores what that practice actually is. Historically, the best known example of “court packing,” of course, dates to the Franklin Roosevelt Administration when Roosevelt, frustrated by the Supreme Court striking down several key elements of the New Deal as unconstitutional. Essentially, FDR’s plan would have given the President the right to appoint a new Justice for every Justice that didn’t retire within six months after turning 70. Given the fact that the majority of the Justices who were ruling against Roosevelt’s policies were near or over the age of 70 at the time, this would have allowed Roosevelt to significantly transform the ideological balance of the Court to the point where those conservative Justices would have been effectively outnumbered by the liberal wing of the Court bolstered by new FDR appointees. The reaction to FDR’s proposal was swift and negative. Powerful members of his own party came out in opposition to it, and it eventually became clear that it would never be able to pass Congress despite the fact that the Democratic Party had a huge majority in both Houses. So, the plan was withdrawn.  What President Obama is doing here isn’t “court packing,” it’s seeking to fill vacancies on an important appellate Court that have been lying unfilled for far too long.

So, what do you know about these three nominees? The Atlantic Wire has a good summary:

On paper, each of these candidates seems exceptionally well-qualified for the position they’re being appointed to, though I’ll admit not knowing anything about any of them beyond what’s being reported so far. Even if it turns out that they are qualified, though, that obviously won’t be the end of the story. If all three of these nominees were confirmed, it would have a significant impact on the ideological direction of the D.C. Circuit, which is important because this is the Court that hears virtually all challenges to Federal law, actions by regulatory agencies, and issues involving disputes among the political branches over one point or another. They also have an extensive criminal docket, including quite a few terrorism related cases in recent years.

Given that, one can expect that the GOP will fight these nominations, and that we are likely to see a showdown in the Senate over the issue of filibusters of Judicial Nominations. This is an issue that has come up in the past, of course. Indeed, during those parts of the Bush Administration when Republicans controlled the Senate, there were several occasions on which the GOP Senate Leadership threatened to use parliamentary procedures to eliminate or scale back the filibuster when it came to such measures, partly using the argument that the filibuster frustrated the Senate’s Constitutional duty to “advise and consent” to such nominations. In the end, the GOP’s threat to use the so-called “nuclear option” to change the filibuster rules as it related to nominations to the Judicial Branch was withdrawn after a deal was made by the so-called “Gang of 14” that allowed most of the Bush nominations that Democrats had been blocking to go forward to an up-or-down vote. This time around, the question will be what the GOP will do with regard to these nominations, and how Harry Reid and the Democratic Caucus will react. It will be an interesting process to watch.

As a preliminary matter, though, it needs to be made absolutely clear. The idea that the President is doing anything wrong or improper in making these three appointments is utterly absurd. Is he playing politics? Of course he is, but then he’s a politician, Washington is a political town, and the Senate GOP is going to playing their own political games when these nominations make it to the Senate.

Will Another Senate Showdown Over Filibusters Lead To The ‘Nuclear Option’?