40% Of Designated Drivers Drink And Then Drive 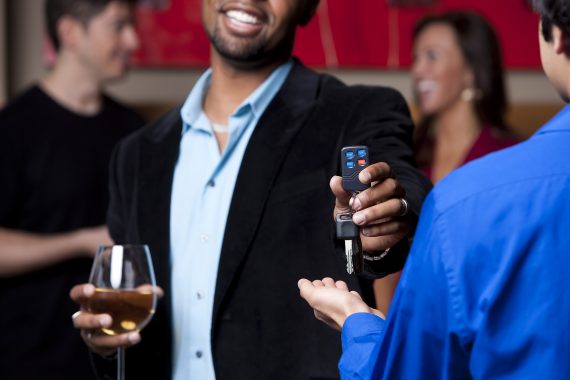 A new study finds that the behavior of “designated drivers,” people who at least in theory refrain from drinking at a given social function so that their friends can get home safely, is less than ideal:

In theory, the “designated driver” arrangement seems pretty easy: You go out drinking with friends, one friend abstains, and that friend drives everyone home. But in practice, according to new research published on Monday in The Journal of Studies on Alcohol and Drugs, a large percentage of designated drivers swill booze anyway. A trio of Florida researchers studied drinkers in an unnamed Florida city, and through on-the-street interviews and Breathalyzer tests found that “approximately 40%” of designated drivers chose to consume alcohol before driving others home. A full 17 percent had breath alcohol concentrations between 0.02 to 0.049 grams (per 210 liters); 18 percent posted 0.05 grams or more. For comparison, the federal threshold for the offense of driving while intoxicated is a blood alcohol content level of 0.08, which the National Transportation Safety Board has recommended lowering to a standard 0.05 BAC, which is legally interchangeable in the U.S with breath alcohol concentration.

This obviously isn’t what the entire concept of the “designated driver” is supposed to be all about and, indeed, there are plenty of studies showing that even people with BAC readings below the legally intoxicated level of .08 can be impaired in their driving ability, especially in situations that may require a quick reaction time. So, if you’re going to be a designated driver, one would think it would be best to not drink at all before getting behind the wheel to take your more intoxicated friends home.

On a side note, it’s interesting to note that the entire idea of designated drivers is relatively new:

The concept of “designated driving” is actually a fairly recent invention — it originated in northern Europe before spreading to North America in the late 1980s, via Harvard’s famous Alcohol Project — so it’s conceivable that kinks still need to be worked out. But millions of Americans have been educated about the effects of alcohol, thanks in no small part to the lobbying power of Mothers Against Drunk Driving. Indeed, the Florida study’s authors suggest that their findings “identify the need for consensus across researcher, layperson, and communication campaigns that a [designated driver] must be someone who has abstained from drinking entirely.”

As I said, that would seem to be the ideal situation.