The economy is booming. Except where it's not. 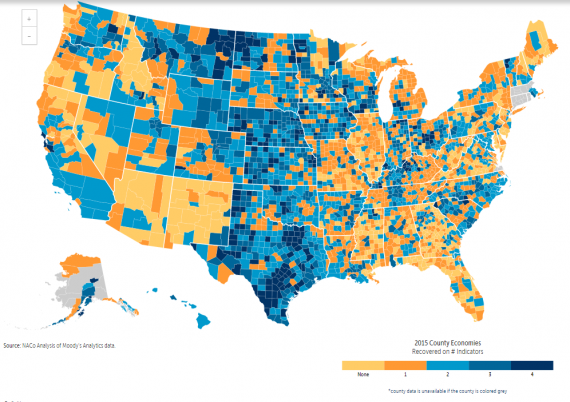 In his valedictory State of the Union address, President Obama declared that, “Anyone claiming that America’s economy is in decline is peddling fiction.” By almost any standard, he’s right. Aside from the silliness of taking credit for “gas under two bucks a gallon,” all the indicators he points to, especially job growth, are moving in the right direction.

It’s worth noting, though, that the recovery from the Great Recession is far from complete and, more importantly, highly uneven.  Indeed, a new study finds, “93% of counties in the U.S. have failed to fully recover.” Eric Morath summarizes for the WSJ:

Nationwide, 214 counties, or 7% of 3,069, had recovered last year to prerecession levels on four indicators: total employment, the unemployment rate, size of the economy and home values, a study from the National Association of Counties released Tuesday found.

The reality is slowing population growth and industry shifts mean some parts of the country will likely never fully recover. But by the end of last year, more counties had not recovered on any one of the four indicators, 16%, than had recovered on all of them.

“Americans don’t live in a single economic place,” said Emilia Istrate, the association’s director of research and outreach and one of the study’s authors. “It tells you why many Americans don’t feel the good economic numbers they see on TV.”

Meanwhile, in 27 states, not a single county had fully recovered.

Some of the nation’s largest counties finally recovered from the recession in 2015, including the counties containing Denver, San Francisco, San Jose, Dallas and Columbus, Ohio. In 2014, no county with more than 500,000 residents had fully recovered. Last year, 17 of 126 had.

The recovery is spreading out from the energy-rich center of the country—in part because a massive drop in oil prices is reversing job creation there while providing an economic benefit to larger metro areas near the coasts.

Numerous counties on the West Coast, Nevada, New York, Florida and the Carolinas recorded better than 4% economic growth last year, the NACo study found. (The entire country appears to be growing at about a 2% rate.) But a large swath of counties in Texas, Illinois and other states in the middle of the country suffered economic contractions last year.

Now, on the one hand, this is highly misleading. As has been repeatedly noted since the county-by-county voting maps gained popularity during the bitter dispute over the 2000 presidential election results, looking at the country in that way can be very misleading. After all, most counties have very few people living in them while others are highly concentrated. Los Angeles County, California has slightly more than 10 million residents.  That’s more people than live in 41 of the 50 states.  Cook County, Illinois has over 5 million residents, more than all but 22 of the states. A Business Insider piece from a couple years ago noted that half the population of the United States lived in 146 counties out of more than 3000 in the country. Visually, it’s even more stark: 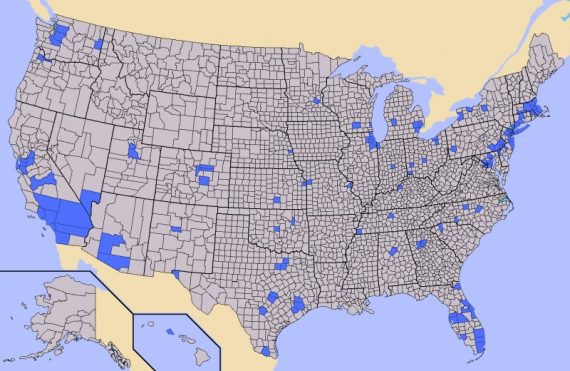 Still, the localized data gives us information lost at the macro level. People living in all but 7% of the land mass still haven’t made it back to where they were eight years ago. To them, the sense that the economy is booming is simply crazy talk. Everyone they know is still below water.