If you changed the channel after the third quarter, you missed what ended up becoming a game for the ages. 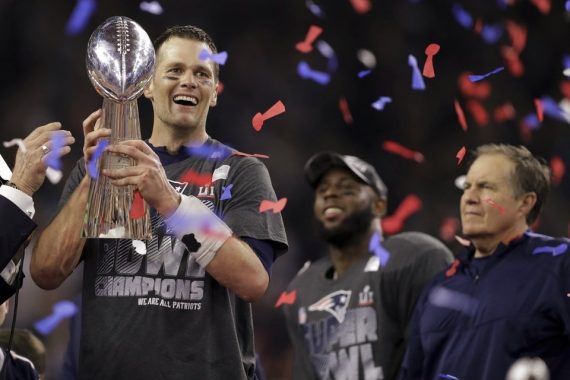 If you gave up on last night’s Super Bowl after the third quarter, you could hardly be blamed. After being held to just three points in the first half while the Falcons scored 21 points against a New England defense that seemed porous and ill-prepared, the New England Patriots had scored only once after coming back in halftime, and that was a touchdown that included a rare missed extra point by Patriots kicker Stephen Gotowski while the Falcons added another seven points to their lead to make the score 28-9 headed into the fourth quarter. By all accounts, it seemed as though the Patriots would come up short in their quest to join the rare teams who have won five or more Super Bowls, something that only the Steelers, Cowboys, and 49ers had done to this point. If you did turn the television off, though, you missed the end of what turned out to be one of the biggest comebacks in Super Bowl history thanks to a performance from the Patriots that proved all their critics wrong:

HOUSTON — The chants rang out loud and long at NRG Stadium in South Texas, not from bars or living rooms across New England, until a wall of sound enveloped a team and a quarterback on a mission. “Brady, Brady,” the fans screamed, and it is in moments like this — the first overtime in Super Bowl history — that Tom Brady appears most comfortable, as if lounging on his sofa in his beloved Uggs.

In each of his previous four Super Bowl victories, Brady guided game-winning drives for the Patriots. However sublime, those efforts against the Rams, the Panthers, the Eagles and the Seahawks all seemed quaint before Sunday night.

That is when Brady again summoned the sorcery of his right arm to stun the Atlanta Falcons in what is undoubtedly the greatest late surge in a Super Bowl. When James White sneaked into the end zone from 2 yards away, completing a 34-28 victory that defied the bounds of credulity and secured the Patriots’ fifth title, his teammates stormed onto the field, flung their helmets and hugged anyone who moved.

Across the field, the Falcons watched from their sideline as if fossilized in amber, too exhausted and dumbstruck to move.

The Patriots trailed by 25 points with 2 minutes 12 seconds remaining in the third quarter — and by 19 with 9:48 left in regulation — and they won.

They won because of Dont’a Hightower’s critical strip-sack and Julian Edelman’s Velcro hands and the clock management and coaching of a maestro, Bill Belichick, but mostly because of a truism that has beleaguered the league’s other 31 teams for 16 years running: the Patriots have Brady, and no one else does, not even the Falcons, who boasted the N.F.L.’s most valuable player in Matt Ryan.

Not including their 3-second possession at the end of regulation, the Patriots, after mustering only a field goal on their first seven drives, scored on their final five possessions.

“At halftime, I would say we weren’t down at all,” Brady said. “We were disappointed in the way we played, and we knew that we could go out and do a lot better in the second half.”

Brady completed 43 of 62 passes for 466 yards, with two touchdowns and an interception, a performance that earned him Super Bowl M.V.P. honors for the fourth time in his career. In none of the other three instances did he handle a season as challenging as this, from the illness plaguing his mother, Galynn, to the four-game suspension served for his role in that protracted saga known as Deflategate, after the underinflated footballs meant to give him a throwing advantage.

In accepting the Vince Lombardi Trophy from Commissioner Roger Goodell, who meted out the punishment, the owner Robert K. Kraft did not outright address the scandal. But he did allude it to it in perhaps the strongest possible terms.

“A lot has transpired in the last two years, and I don’t think that needs any explanation,” Kraft said.

Because of that, he said, this title is “unequivocally the sweetest.”

His reputation sullied, Brady embarked on a nationwide tour of vindication that reached its climax in the venue where he won his second Super Bowl, back in February 2004, long before the Patriots achieved modern dynasty status in an era designed to encourage parity.

Brady was 26 then, and it is possible that he is now superior in all facets, six months shy of his 40th birthday, at an age when most of his peers have either retired or entered a noticeable decline. By going 3-1 during his suspension, the Patriots created the farcical perception that they no longer needed him — that quarterbacks in New England’s ruthless machinery are interchangeable, even Brady.

He turbocharged the Patriots’ offense with 33 touchdowns to four interceptions heading into Sunday, when he toiled, misfiring wide and long, until late in the third quarter.

Powered by three touchdowns in a 9:54 span of the second quarter, Atlanta led by 28-9 with 10 minutes left before the Patriots unleashed 10 minutes of mayhem.

Hightower’s strip-sack catalyzed the comeback, with Brady capitalizing on excellent field position to find Danny Amendola from 6 yards out. Less than 6 minutes remained, and though the Falcons advanced deep into New England territory, a holding penalty knocked them out of field-goal range, forcing them to punt.

As the fourth quarter drew to a close, the Patriots racked up eleven unanswered points make the score 28-20, at which point they kicked off to Atlanta in the obvious hope that they’d have at least one more chance to score before the game ended. Thanks in large part to an Atlanta team that suddenly looked nothing like the one that had played for the first three quarters of the game, they got that chance and proceeded to march the ball down the field on a 91 yard drive that resulted in another touchdown capped off with a second straight two-point conversion that tied the score with only minutes left in the game. At that point, the only question was whether the Falcons could get within Field Goal range to try to win the game, and when that failed to happen, we headed into the first overtime in the half-century history of the Super Bowl.

Under the NFL’s overtime rules, the team that wins the coin toss has the advantage of being able to end the game if they’re able to score a touchdown on their first possession of the overtime period. Any other outcome, such as a Field Goal or no score at all, would give the other team a chance to score themselves and win the game with a touchdown. As if to mirror how the game had gone for most of the Fourth Quarter, New England won the coin toss and took the first possession. At that point, and given the fact that the Patriots had scored 28 unanswered points in the last quarter of the game, the outcome seemed inevitable. For one thing, the Atlanta defense clearly looked exhausted after being put through the ringer at the end of a game and the Patriots were fired up in a way they had not been throughout the game. Therefore, when Tom Brady marched the team down the field and the game-winning touchdown was scored, it was something that was seemingly inevitable. All that was left was the schadenfreude for the moment when NFL Commissioner Roger Goodell was forced to hand the Lombardi Trophy to Robert Kraft, Bill Belichick, and Tom Brady, and to award Brady his fourth Super Bowl MVP award. After two years of the ridiculousness that was ‘Deflategate’ that ended with Brady serving his four-game suspension, during which the Patriots went 3-1, it was a moment that no doubt satisfied Patriots fans everywhere.

With the game and the NFL season over, the inevitable questions arise. A game that seemed as if it would end in another blowout instead ended up giving us one of the most exciting conclusions of any of the previous fifty games before it, and one of the most amazing comebacks in NFL history. Whether you love or hate them, the Patriots seemed to cement their claim to being the best team of the 21st Century to date and among the best dynasties in NFL history. With five Super Bowl wins in seven appearances over the past fifteen years, Belichick and Brady certainly seem as if they are the best Head Coach and Quarterback combination in the NFL’s modern era, indeed both men can lay claim to something no other Head Coach or Quarterback has ever done in winning five Super Bowls to begin with. And, in a year that saw the Golden State Warriors blow a three game to one advantage in the NBA Championship and the Cleveland Indians blow a three games to one advantage to allow the Chicago Cubs to win their first Super Bowl in 108 years, the collapse by the Falcons was one for the history books. Or, as I noted on Twitter at the end of the night, the worst thing to happen to Atlanta since General Sherman came to town. Whether this was the ‘best Super Bowl ever’ is a matter of opinion, I suppose, but at the very least it’s going to be tough for future games to match the one that marked the 50th anniversary of a game that has become something akin to a national holiday.