A new biography of Adolf Hitler analyzes new documents about his World War I service and "concludes that he was not the hero he was later made out to be and that his radicalization shouldn't necessarily be attributed to his wartime experiences." 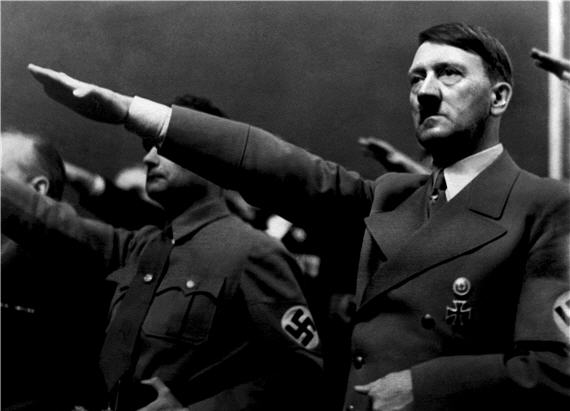 A new biography of Adolf Hitler analyzes new documents about his World War I service and “concludes that he was not the hero he was later made out to be and that his radicalization shouldn’t necessarily be attributed to his wartime experiences.”

Spiegel (“A Hero in His Own Mind: Hitler Biography Debunks Mythology of Wartime Service“):

In death, Hitler looked more like a man who had stepped out of the past. He wore a simple, field-gray military coat bearing only two medals — the wound badge and the Iron Cross First Class — both of which were from World War I. Throughout his life, Hitler was proud of these medals because they had been “soiled with the dirt of France and the mud of Flanders.”

Hitler’s “political will,” dictated shortly before he committed suicide on April 30, 1945, was meant to convey the message that he, as a man of the people, had been deeply influenced by these early experiences. It spoke about how, beginning in 1914, he had served as a “volunteer” and made his “modest contribution to the First World War, which had been forced upon the German Reich.”

Previously, Hitler had boasted about having “risked his life, probably every day” and having always “looked death in the eye.” In other words, by his own account, he was a hero who “as if by a miracle” had remained healthy, defying the hail of bullets and remaining steadfastly fearless in the “most unforgettable and greatest time of my earthly life.”

In his book “Hitler’s First War” (published in German for the first time this week), Weber uses these documents to help rebut the widely held views about Hitler’s early years and demystify certain legends about them. For example, Weber concludes that the unit Hitler served with was by no means a sort of precursor to the Nazi Party, as some have claimed. In fact, as Weber and his researchers discovered, only 2 percent of the soldiers in that unit would later go on to join the Nazi Party.

What’s more, Weber finds that Hitler was never the front-line soldier that he and the Nazi propagandists would later make him out to be. Instead, he says that this historical whitewashing was a highly political act in the run-up to the so-called Machtergreifung, the Nazi seizure of power.

In reality, however, Hitler spent almost the entire four years of World War I a few kilometers behind the main battle line and therefore often outside the most dangerous areas. His job as a runner also meant that he was by no means in the “midst of bombardment.”

This is all very interesting. But the fact remains that Hitler was awarded the Iron Cross First Class, the highest award possible for an enlisted soldier in the German army. And one already had to have an award of the Iron Cross Second Class to be eligible.  To be sure, it was a somewhat over-issued honor, with some 145,000 medals awarded during the conflict. But he’d clearly been recognized for heroism in battle.