Given the schedule they're on in the Courts of Appeals, it is likely that the Supreme Court will rule on one or more of the lawsuits challenging the Constitutionality of the Affordable Care Act just before the start of the 2012 campaign. 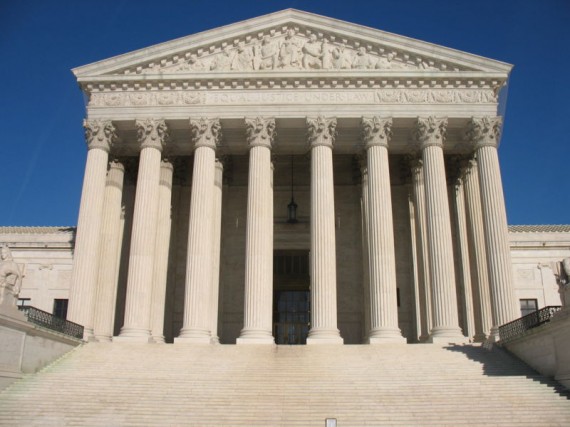 The ACA Litigation Blog reports that there are now four ObamaCare cases scheduled to be argued at the Court of Appeals level this summer:

What this means is that all of these cases could theoretically reach the Supreme Court by the fall:

The reason is that, with now four cases to be heard by the courts of appeals on an expedited basis in May and June, the decisions from the circuits are likely to come down by the end of the summer. The losing side then has 90 days to file a petition for a writ of certiorari, and the winner 30 days to respond, at which point the petition will be calendared at the Supreme Court. (The loser can accelerate the schedule by filing the cert petition sooner.)

It now seems quite likely that at least one of these cases, and perhaps several, will generate petitions for certiorari soon enough for the Court to resolve them before mid-January 2012. (That is typically the cut-off between Terms; petitions granted after mid-January are typically argued the following autumn.) Thus, the timeline is such that the Court is likely to grant one of the cert petitions in late fall of this year, hear argument in the spring of 2012, and issue a decision by the end of June 2012.

There are several caveats, of course. The Courts of Appeals could take time issuing their decisions, meaning that the time to appeal to the Supreme Court would be pushed back and the case may not get argued until the October 2012 term. Given that all three courts have placed these cases on an expedited calender, though, that seems unlikely. With regard to Virginia v. Sebelius specifically, the Supreme Court could decide to accept Virginia’s application for direct appeal to the Supreme Court, although that seems unlikely. Finally, of course, the Court could decide not to accept any of these cases for appeal but that also seems unlikely given the fact that they impact such a substantial federal law.

More likely than not, then, the Supreme Court seems on track to issue a decision on whether or not President Obama’s signature legislative achievement is Constitutional right before the start of the 2012 election campaign. That should make things very interesting.

Latest Round Of Same-Sex Marriage Appeals Arrive At Supreme Court