Al Gore to the Rescue? IF AL GORE can pull himself away from saving the planet long enough, he might want to consider rescuing the Democratic Party from the clutches of utter self-destruction.

Hillary Rodham Clinton has made it clear she won’t quit and no one expects Barack Obama to exit – and so on to the Denver party convention they go, viciously attacking one another all the way.

That leaves Al Gore as the only person with the experience to answer the red phone and force a peaceful end to this civil war.

The inconvenient truth is that the red phone is now ringing and Al Gore hears it. The only question is whether he has the guts to pick it up.

Bruce McQuain and John Derbyshire are reading this, not unreasonably, as a call for Gore to jump into the race and offer himself up as an 11th hour nominee. But Hurt doesn’t actually come out say this. Perhaps he just thinks Gore should throw his weight around (insert joke here) and get the candidates or the superdelegates to end this thing. I’ve emailed Hurt for clarification.

Both McQuain and Derbyshire, incidentally, think Candidate Gore is a great idea. For the Republicans. Don Surber, meanwhile, quips that “If Al Gore is your answer then you’re asking the wrong question.”

I tend to agree with Derbyshire that Gore would relish the idea of being the savior. He might well be able to get the nomination if there’s no clearcut winner after Pennsylvania and he’d get to avoid the mess of a long primary battle. But I’m not sure how this saves the party. Indeed, both Obama and Clinton supporters would rightly feel cheated if Gore swooped in and was handed the nomination.

UPDATE: Steven Taylor adds some detailed thoughts on why this scenario doesn’t make much sense. 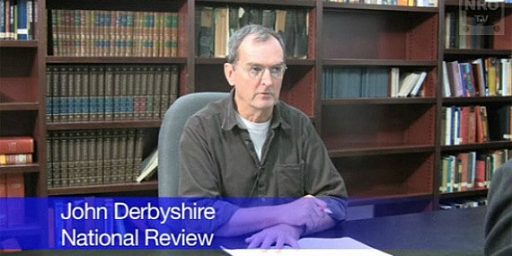