An Update On The “Pressure Cookers” Google Search Story

Presumably because I blogged about the issue this morning, I just recieved the following email from the public information office of the Suffolk County, New York Police Department: (click to enlarge) 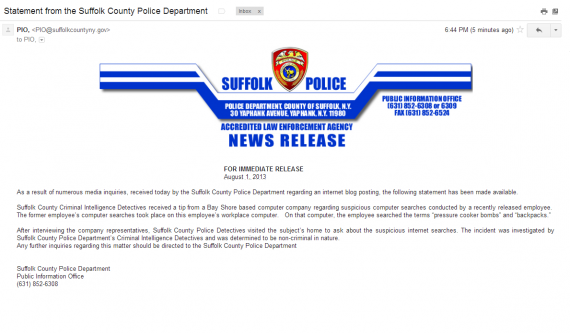 Here’s the text of the statement:

As a result of numerous media inquiries, received today by the Suffolk County Police Department regarding an internet blog posting, the following statement has been made available.

Suffolk County Criminal Intelligence Detectives received a tip from a Bay Shore based computer company regarding suspicious computer searches conducted by a recently released employee. The former employee’s computer searches took place on this employee’s workplace computer. On that computer, the employee searched the terms “pressure cooker bombs” and “backpacks.”

So, apparently, it wasn’t the FBI. Nonetheless, this raises as many questions as it answers.